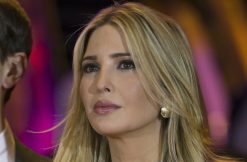 You might have heard of Justin Massler. The Nevada man pleaded guilty in 2012 to aggravated harassment after Ivanka Trump. He’s now been arrested again for getting a little too close. Back then, it was by police. Now it’s by the Secret Service, because in case you’ve been in a coma, Trump’s father just so happens to be the President-elect of the United States.

TMZ reports that Massler broke out of a Nevada mental health facility in November—he has a long, well publicized battle with mental illness—and ended up in New York. Mind you, the story is based on unnamed sources, so take it as you will. The outlet was told that he ended up in New York City, and his brother, who lives there, put him up in a hotel. Just a black away from Trump Tower in Columbus Circle. The Secret Service found him out, and arrested him on November 29. No charges have been filed, and Massler, who is still on probation regarding the 2012 plea, is reportedly at Bellevue Hospital.

He’s been accused of stalking another woman in the past, and there’s this incident in Harvard University from June:

Infamous stalker Justin Massler was removed from Harvard today by campus police, a woman who works there tells me. pic.twitter.com/Ksv7KcY8l8