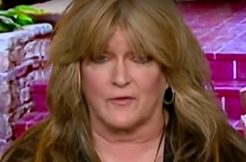 You’ve seen the Brady Bunch, right? Remember Cindy Brady, the youngest? The actress who played her, Susan Olsen, went on to host the talk radio show “Two Chicks Talkin’ Politics” over at LA Talk Radio. Except that ended on Friday after she used a homophobic slur on social media.

Producer Leon Acord-Whiting said Olsen, 55, chewed him out in a post after he criticized her on Facebook. An apparent screengrab of her outburst has been circulating.

“What a true piece of s–t you are!” she wrote toward the end of post. “Lying f—-t! I hope you meet your karma. SLOWLY AND PAINFULLY [sic].”

What got her so mad? This came after Acord-Whiting appeared on her show and later criticized her on Facebook. He called her a “Trump fanatic” and said she was spreading misinformation like Hillary Clinton causing hate crimes.

“I will not listen to or appear on any shows there from this point forward until she’s gone,” wrote Acord-Whiting, who is openly gay. “This isn’t just disagreeing on, say, tax plans or foreign policy. Susan Olsen spreads outrageous misinformation & it is dangerous and unprofessional.”

And now Olsen is out of a job. LA Talk Radio announced on Friday that they cut ties with the former child actor.

“LA Talk Radio takes pride in its close and collaborative relationship with the LGBT community, and will continue to provide a home for those who have hopeful and positive messages of togetherness and tolerance to share with our listeners,” they wrote. “We will not tolerate hateful speech by anyone associated with our radio station and have severed our ties with a host that veered off the direction in which we are going.”