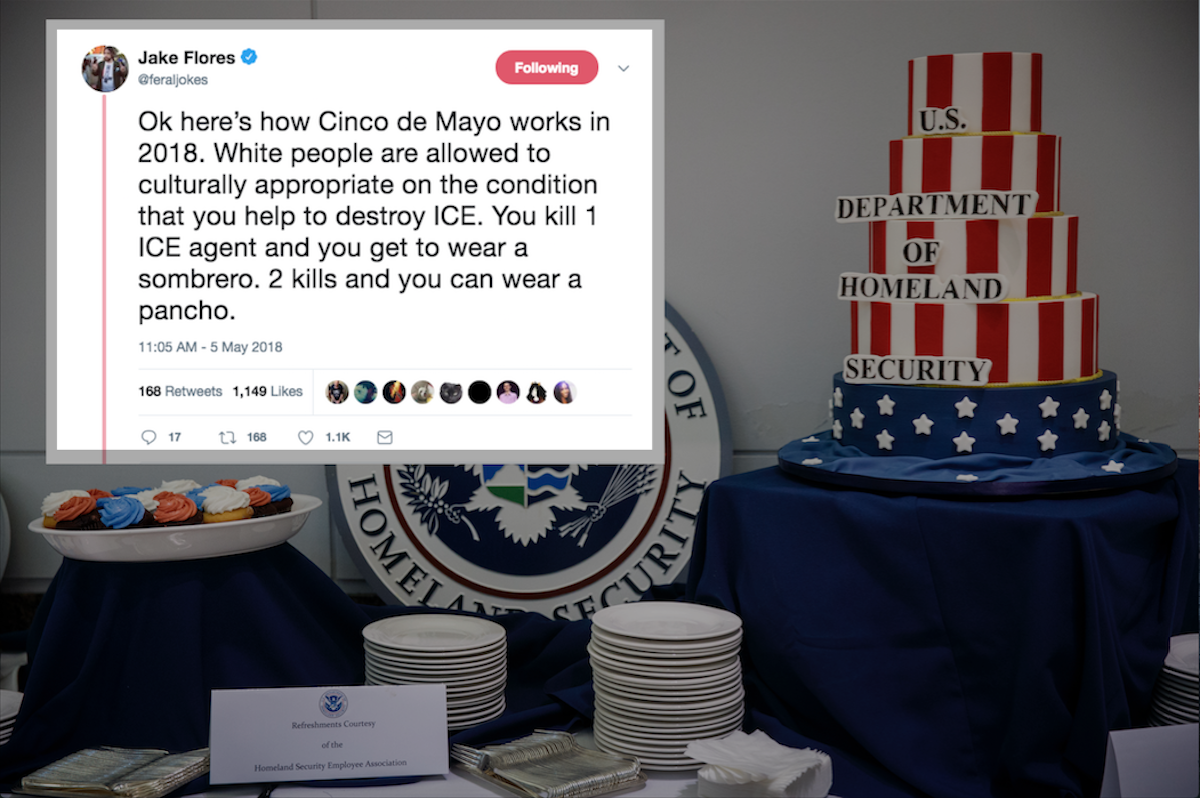 Jake Flores is a stand-up comedian and podcaster who lives in Brooklyn, New York. Like many other pliers of the craft, Flores frequently posts his jokes on Twitter dot com. One recent joke didn’t go over so well with federal law enforcement officers, so they barged into his house and harassed him about it.

On Cinco de Mayo, Flores made the following joke in a series of tweets. He wrote:

Ok here’s how Cinco de Mayo works in 2018. White people are allowed to culturally appropriate on the condition that you help to destroy ICE. You kill 1 ICE agent and you get to wear a sombrero. 2 kills and you can wear a pancho. 3rd kill you can draw a mustache on your face in sharpie. 5 kills and you can do skull paint. It goes on and on like this up to 100. After you kill 100 ICE agents you are allowed to be full on racist and no one can give you shit about it. Drive a lowrider, call people wetbacks, get a weird tattoo of a chola that’s also a clown for some reason. No one can stop you. You earned it.

Here’s how to understand Flores’ joke: quite a bit of liberal-left discourse is frequently consumed by the idea that certain people with certain skin tones are not allowed to wear, share or “appropriate” the “culture,” clothing or haircuts of people with different-colored skin. However, Flores appears to be a member of the so-called “dirtbag left,” a nascent movement of left-wing media figures opposed to political correctness and committed to “reclaiming vulgarity” in the service of left-wing political goals that exceed the civil and centrist confines of the Democratic Party and traditional liberal thought.

Basically, Flores was making fun of the concept of “cultural appropriation” by simultaneously taking aim at Immigration and Customs Enforcement (ICE) for their tendency and mission to deport people of color and break up their families–Latin-American individuals in particular. Attorney General Jeff Sessions clarified this official federal policy just days ago in a speech to Arizona law enforcement.

Flores’ joke was widely liked and retweeted. But eventually it made its way into the wrong hands.

The very next morning, four agents with the Department of Homeland Security (DHS) showed up at Flores’ door, demanding answers. In comments to Splinter News, Flores recounted the visit. He said:

I open the door and there are four guys, and they say “Homeland Security” and hold a badge up like they’re in a movie. I’ve been arrested a lot of times, and I didn’t get the feeling that’s what they were going for because cops are the ones that come in and immediately arrest you and want to assert all this dominance. These were nerds, lanyard guys. They sort of came in and made their statement pretty quickly, and I thought, “I’m either going to get arrested or not.”

Ultimately, and after a long conversation about Roseanne Barr, Alex Jones, pork-barrel spending and sex workers’ rights, the agents left–leaving Flores with the impression that DHS will be keeping an eye on him because of his 10,000 or so Twitter followers.

In a statement to Splinter News, ICE’s Jennifer Elzea said, “The kind of language expressed in the tweets, even in an allegedly joking manner, is reckless and irresponsible. It potentially puts at risk those who have taken an oath to uphold the law and protect public safety.”