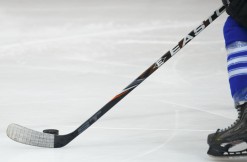 Heartbreak! This sweet pain has been ripe fruit for love poets from Sappho and Shakespeare to Justin Bieber and your annoying, infatuated classmate in 10-grade Biology. But sometimes these urges, these feelings, literally burn.

A minor league hockey player, Justin Agosta, allegedly committed second-degree arson when he torched love letters from his girlfriend in December, according to Lee County Sheriff’s authorities in Florida. Agosta apparently told firefighters at the scene (his apartment) that his girlfriend ticked him off. So obviously, he allegedly picked up some gasoline and doused letters that she wrote him.

And as one might expect, the fire got out of hand. Agosta told firefighters he tried to put it out with water and a towel. Tried and true method, I’d say. Thankfully, the fire sprinkler went off, and he called 911.

Agosta plays for the Florida Everblades (insert groan here), who reached the ECHL playoffs last year. Miraculously, he has reportedly not missed a game since his arrest, but he still has a Feb. 1 court date to look forward to. He better hope he gets to the NHL as soon as possible because he faces fines up to $10,000 and a prison sentence as high as 15 years.