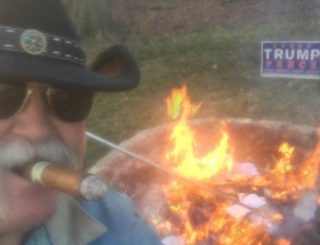 Sheriff Richard Jones of Butler County, Ohio was a Republican elector for this year’s Presidential election. Before electors met on Monday, Jones received a large volume of letters against the President-elect, looking for him to cast his electoral vote elsewhere. Well, Jones voted for Trump, and that same day he had a message for those who didn’t like it, in the form of videos he posted to Twitter.

Jones gathered a large pile of letters — thousands, he claimed — on his farm, doused them in what he said was “elephant pee,” and set them ablaze, with “me, my cows, and my wife Becky” watching them burn. “Don’t try this at home,” he warned.