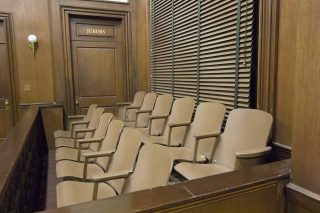 When it comes to racial bias and criminal courtroom, the reality is that judges will sometimes find themselves damned if they do, and damned if they don’t. The case of James Doss and the Jefferson County Circuit Court in Kentucky presented just such a lose-lose situation for the judge.

James Doss, a black man, was tried for felony theft. As all jury trials do, the case began with jury selection. Forty-one prospective jurors were chosen from the main jury pool to enter the courtroom and await potential selection. Before the actual jury selection even began, the judge and Doss’ lawyer noticed a major problem – only one of the forty-one members of the jury pool was black. And in Jefferson County, Kentucky, one in forty-one isn’t representative of the racial makeup of the community.

By the time Doss’ actual jury was empaneled, even that one African-American had been dismissed, and the resulting twelve-member jury was all white. Doss’ lawyers argued the unfairness of a black defendant being tried by an all-white jury – after all, there had even been a United States Supreme Court case that originated in Kentucky specifically ruling that excluding blacks from juries was a “primary example of the evil the Fourteenth Amendment was designed to cure.” It seems obvious that something was wrong with the Doss jury. But it wasn’t quite that simple. Doss’ jury had been randomly selected and empaneled. The judge examined all phases of the picking of Doss’ jury, and everything had been handled properly and without even a hint of discrimination or bias. No black jurors had been excluded – they simply hadn’t been called for jury duty that day. The racial imbalance on the jury was purely a random anomaly, and not the result of any intended unfairness.

The judge, who was likely aware of the long legal history of racism in the jury system stemming back to Strauder v. West Virginia in 1880 (a Supreme Court case that struck down a state statute permitting only white men to serve as jurors), wasn’t going to take any chances. He dismissed the all-white jury, and on the next court day, started the process over with a new jury pool. A new jury – one that was more racially diverse—was selected, the case proceeded to trial, and James Doss was acquitted.

Although the Commonwealth of Kentucky is unable to appeal Doss’ acquittal due to the rules against double jeopardy, it began a lawsuit based on Doss’ case to the Supreme Court of Kentucky. That lawsuit argued that the judge had been wrong to dismiss Doss’ first jury, because although it had been racially homogeneous, it had been fairly and legally assembled.

The Kentucky Supreme Court grappled with the question of whether the judge was to be commended or condemned for attempting to nip the Doss jury problem in its all-white bud. The Court sided with the Commonwealth, and ruled that the judge had been wrong to dismiss the first jury. Doss, the Court explained, had no right to a jury that reflected the racial demographics of his community. Rather, “he had a right to a petit jury drawn from a larger pool of potential jurors that ‘reflected a fair cross-section of the community.’” So long as the entire jury pool was properly assembled, impartiality is to be presumed. The Court extolled the virtues of random jury selection as the most dependable road to impartiality and warned against the dangers of allowing a trial judge the discretion to dismiss a jury that doesn’t conform to his or her standards of fairness. The Court explained:

“We believe the temporary advantage of [a policy allowing a judge to dismiss a jury based on lack of racial diversity] is short-sighted and would be short-lived. Different judges will have different ideas on what constitutes a fairly composed jury: i.e. How many jurors matching the race of each party should be seated to compose a fair jury? What personal characteristics of the parties should be seated to compose a fair jury? What personal characteristic of the parties, such as religion, ethnicity, gender, and national origin should be selected to achieve a fairly composed jury? Without standards by which to judge the “proper” composition of a jury, each trial judge would be left to apply his or her own individual criteria, discharging and replacing jury panels until a pleasing composition was attained. The advantage of random selection would be lost; successive random draws until the desired result is achieved is not random.”

While being proactive in the face of racial injustice is often a good thing, this well-meaning Kentucky judge has now been schooled on the limits of his discretion.