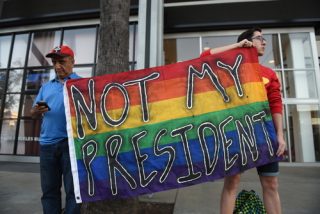 A bill that aims to make it legal for people and organizations to refuse service based on religious beliefs about marriage is expected to be proposed again after Donald Trump takes office in January. The First Amendment Defense Act (FADA), first created in 2015, was shelved due to Democratic opposition and expectations that President Barack Obama would veto it. With a new Republican administration, it could see new life, and opponents are bringing the fight back to it.

FADA was filed in the House and Senate last year, sponsored by Rep. Raul Labrador and Sen. Ted Cruz.  The bill says that the federal government should not take “discriminatory action” against anyone who “believes or acts in accordance with a religious belief or moral conviction that marriage is or should be recognized as the union of one man and one woman, or that sexual relations are properly reserved to such a marriage.” So for example, you couldn’t get in legal trouble for refusing to take wedding photos for a gay couple.

Individual states have passed similar religious freedom laws with more specific language aimed at protecting business owners from having to act against their beliefs. Mississippi’s version extended to public officials and included the belief that gender is determined by biological sex at birth. That law was struck down by a federal court days before it was supposed to take effect.

Supporters of FADA and similar bills look to keep the government from forcing businesses and non-profit organizations to get involved in activities that go against their beliefs. This would include wedding-related service providers who may not want to participate in gay marriage, or health care providers who don’t want to assist a single woman seeking an abortion.

President-elect Trump has expressed support for FADA. On his website, Trump says, “If I am elected president and Congress passes the First Amendment Defense Act, I will sign it to protect the deeply held religious beliefs of Catholics and the beliefs of Americans of all faiths.”

Opponents argue that gay marriage and abortion are legal, and to refuse service to people seeking these services is discriminatory in its own right. If FADA passed, it could make it far more difficult for people in the LGBT community to get married, and it could impede women’s abilities to get abortions.

The ACLU has taken a stand against FADA, saying, “this misguided and discriminatory legislation is not about protecting churches or clergy. It would permit discrimination against same-sex couples and their children.” Petitions are currently circulating on the internet, drawing tens of thousands of people to stand against the bill’s passage.

The bill is expected to be reintroduced by Sen. Mike Lee, according to a statement by his spokesman to Buzzfeed News. “We made great progress last Congress, the first Congress it was introduced,” Lee’s spokesman said. “we have every reason to believe the momentum will continue next year.” Cruz and Labrador have not responded to LawNewz.com‘s requests for comment.