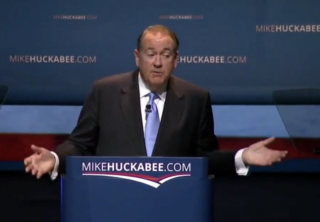 Some people have no sense of humor. Back in May 2015, when Gov. Mike Huckabee was campaigning for President, he gave a speech where he discussed how he wasn’t a Wall Street favorite, and was looking for smaller donations of 15 or 25 dollars a month. “Now rest assured, if you want to give a million dollars,” he joked, “please do it.” The crowd laughed at the quip, and the event continued.

Then commissioners at the Federal Elections Committee wanted to investigate Huckabee for soliciting improper donations. Seriously. Ann Ravel and Ellen Weintraub recommended an investigation of Huckabee for seeking contributions in excess of the $2,700 limit. Thankfully, other FEC officials had a little more sense. The acting General Counsel, Daniel Petalas, took seven pages to say in his September 2015 report that Huckabee was clearly joking and didn’t do anything wrong, even describing his change in body language and intonation when delivering the punchline (because jokes are always funnier when you take seven pages to explain them).

But even after that, the FEC didn’t drop the matter. It wasn’t until April 2016 that a formal vote took place on the matter. In a decision that was recently released, the FEC voted 4-2 to dismiss the allegations and close the case, with Ravel and Weintraub on the losing side.

If you ask me, the real joke is on the taxpayers who paid for all of this.