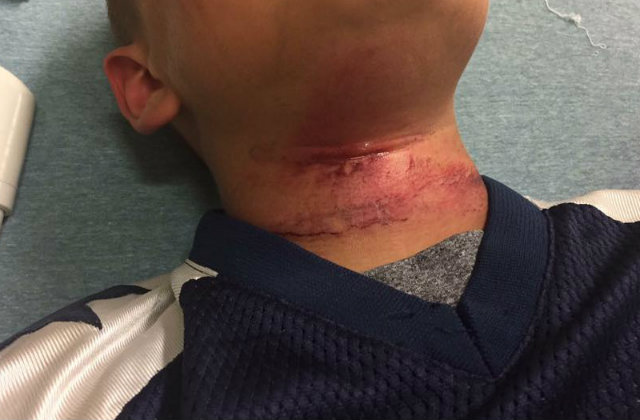 Police in Claremont, New Hampshire are investigating the alleged hanging of a biracial boy on August 28.

“So my son is being flown to Dartmouth after a 14 year old kid decided to hang him from a tree,” Cassandra Merlin wrote in a now-deleted Facebook post. “I don’t care if this was a so called accident or not. My son almost died because of little shit teenage kids.” She said her son is okay, and included several pictures of the boy’s neck.

The child’s uncle Lyrik Merlin wrote about it that same day, sharing one of the same images.

“My nephew was hung from a tree by a 14yr old who claims ‘it was an accident,'” he wrote. “I don’t care what kind of excuse this teenager has but you DO NOT play with somebody’s life.”

“You know what is the most sick part about what happened to my nephew?” he wrote. “My first thought was that somebody did something to him because he’s biracial.”

The 8-year-old’s grandmother Lorrie Slattery told the Valley News, who first reported the incident, that alleged victim was playing with teenagers, who then started calling him racial slurs and throwing rocks and sticks at his legs. This progressed to the alleged hanging.

Don’t expect to learn much more about this case, however. Pretty much everyone involved is a juvenile, so cops won’t release details.

Claremont Police Chief Mark Chase told NH1 that he was prohibited from confirming any details about the case. He could not say if the incident was racially motivated. When it comes to juvenile cases, the focus is on rehabilitating perpetrators, not punishing them as in the adult criminal system.

“These people need to be protected,” he said.