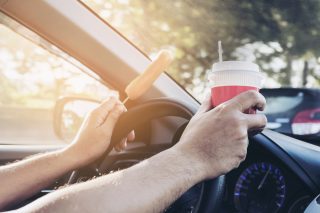 A California driver was arrested for driving under the influence, despite taking a and passing a breathalyzer test. A blood test, however, turned up positive for something else … caffeine. Now the lawyer for Joseph Schwab is fighting to get the case thrown out, The Guardian reported.

Making this case even stranger is that Schwab wasn’t even charged until June 2016, nearly a year after the incident, which took place the previous August. At the time, he was supposedly driving erratically, cutting off an unmarked police vehicle before an officer pulled him over. Schwab’s attorney, Stacey Barrett, has filed a motion to get the case dismissed, and is waiting for a judge to rule on it.

So how does a DUI case go on this long, with no apparent evidence of drugs or alcohol being involved? Well,  Chief Deputy District Attorney Sharon Henry said that the case against Schwab “is not based upon the presence of caffeine in his system,” but acknowledged that the Solano County DA’s Office was “conducting further investigation in this matter.”

With Henry saying that caffeine wasn’t the basis for the charge, and no known positive test for any other substance, Barrett is at a loss for why her client’s case is still going on. “I have not been provided with any evidence to support a theory of prosecution for a substance other than caffeine at this time,” Barrett said, “[n]or I have received any statements, reports, etc., documenting any ongoing investigation,” other than a negative toxicology report from November of last year.

With a trial date scheduled for January 11, almost two weeks away, the lack of evidence turned over to the defense would make it difficult for Schwab’s attorney to prepare for trial. “I’ve never seen this before,” attorney Stacey Barrett told The Guardian. “I’ve never even heard of it.”