20 Years After JonBenet Ramsey’s Murder, Here’s Why I Changed My Mind About What Really Happened 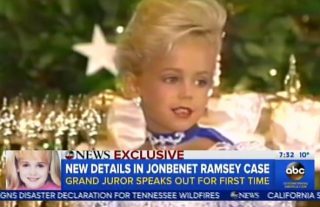 Twenty years ago today, a six-year-old girl named JonBenet Ramsey was abused and then brutally murdered in her affluent Colorado home. Since then, the news media has barely ever stopped discussing, and often misreporting about, the case.

Tomorrow, Lin Wood, the famed attorney for the Ramsey family, is filing a massive $750 million defamation lawsuit against the CBS network and a production company it hired. The litigation is in response to a two-part special on the case (hosted by former FBI profiler Jim Clemente, with whom I have dealt extensively, and strongly disagree with, on the “Penn State Scandal”) which CBS aired earlier this year. In a recent hour-long interview with me, Wood called the program which concluded that JonBenet’s brother Burke killed her, a “despicable act.”

Wood also said that, in all his years of working at the highest levels of this area of law (he also represented the infamously falsely-charged Richard Jewell in the 1996 Olympic Park bombing case), he has “never seen a case of defamation nearly as clear cut as this one.” He went on to confidently predict that his lawsuit against CBS will produce an award which will “easily set a record in First Amendment law,” easily surpassing the Hulk Hogan/Gawker judgment.

Wood, has secured multiple settlements in the past against media outlets for their assertions that Burke (whose parents allowed him, as a young boy, to be interviewed alone, three times, by authorities, including before he had even been told that JonBenet was dead) was the killer. He is sure Burke is innocent and just as positive that no one else in the Ramsey family committed the crime which birthed a media obsession that is still going strong twenty years later.

Up until the last few months (which has brought numerous television specials, including a recent “20/20” on ABC, which prominently featured Lawnewz founder Dan Abrams), I rather strongly disagreed with Wood’s view of the case. But, after extensive research and thought, I am currently convinced that Wood is correct and that the only plausible scenario, as extraordinary as it seems to be, is that an unknown male intruder, who left traces of DNA on two pieces of JonBenet’s clothing, viciously killed the beauty pageant princess.

As I see it, there are two keys to the case from an evidentiary perspective, and one more from a “human” standpoint. When looked at objectively (as opposed to the biased perspectives of a police force which has a huge incentive for the family to be guilty in order to justify their original rush to judgment, and the news media which wants the juiciest ratings-grabbing narrative possible), I now believe they all point directly away from anyone in the Ramsey family having anything to do with this horrific unsolved murder.

The first is the extremely bizarre ransom note. It is the primary reason that I, for one, was totally convinced for nearly two decades that Patsy Ramsey at least had to be in on the crime and that, therefore, her husband John also had to know about it as well. It seems way too strange for a very long ransom note to have been written, on a pad of paper found in the house, by an intruder who would have seemingly been very eager to escape. Since we have always been told by the authorities and the media that Patsy couldn’t be eliminated as the source of the handwriting, it appeared that, barring convincing evidence of someone else’s guilt, there was little reason to look elsewhere for the perpetrator.

However, Wood makes a very compelling case that the handwriting analysis has been “distorted” by the news media. The average grade that the experts gave Patsy’s handwriting sample was about 4.5 out of 5, which is literally as close as you can get to totally excluding someone as a source without technically doing so (this despite the fact that a majority of the experts were chosen by the police and were well aware of what conclusion they wanted). ABC’s “20/20” just recently used an alleged handwriting “expert” who indicted Patsy, but who has been deemed “not qualified” by multiple authorities and had even originally pursued work with the Ramsey defense team back in the late 1990s (which was not mentioned by ABC).

Not being an expert on handwriting, I personally rely on the logic test. If Patsy was really, in the midst of a massive panic caused by the horrifying death of her beloved daughter, going to write a ransom note in some crazed attempt to muddy the waters (to no apparent end) while JonBenet’s abandoned dead body got cold in the basement, why would she write such an incredibly lengthy note? Obviously, the more you write the greater the chance there is that you won’t be able to disguise your handwriting, even when you aren’t under by far the most intense pressure of your entire life.

If you accept that somehow Patsy wrote the long note you then must explain how it is that, hours after the death event, she was able to make the terrified 911 call sound exactly like a mom who just found out their daughter was kidnapped. Part of the “perfect storm” here is that, since she was once a beauty pageant queen, people presume that anything she did which was inconsistent with their own pet theory was simply because she was somehow a great performer (since when are beauty pageant participants known as amazing actors?!).

Many have pointed to the reference to $118,000 in the ransom note as proof that it had to be written by Patsy because it virtually matched John’s Christmas bonus.  However, such an “odd” amount would be insane for a “criminal mastermind” to put in the note because it would obviously point suspicion towards the family. Therefore, that dollar figure may actually be far more consistent with the intruder theory, especially since John’s pay stub with that amount was found on his easily accessible desk and, according to Wood, there are still “ongoing investigative efforts” involving possible suspects from John’s place of business at the time.

I have come to believe that the ransom note is actually the key component to this murder having been a nearly perfect crime. Safely hidden inside the massive house on Christmas night, the intruder wrote the note to create a huge diversion, buy time as everyone waited for a directed phone call the next morning, and deflect suspicion on to the parents. For those who think it far-fetched that someone would know the layout of the house, the Ramseys had just had hundreds of strangers through their home for tours during the Christmas season.

Of course this theory would be baseless if there were not also other huge problems with the case against the Ramseys, and there are many. Foremost among them is the way that JonBenet died.

Until recently, I always assumed that the garrote which was found around her neck was at least remotely consistent with the police/media theory that the crime scene was “staged.” However, when you see the shocking autopsy photos it is clear that this is not remotely the case. There is overwhelming evidence that she was fighting her attacker (who may have used a stun gun on her) until her last breath, and that the massive head wound, which caused almost no bleeding, came AFTER she had been suffocated in order to make sure the deed was done.

This is obviously completely incompatible with the theory that she was killed accidently which, as Wood says, “is nonsensical on its face.” Wood believes that the media purposely downplays the garrote evidence because, “it doesn’t fit with their preferred narrative” and that, consequently, the “public has no appreciation for the brutality of this murder.”

As the parent of a girl who is only a little younger than JonBenet was, I know there is absolutely no chance that my wife or I could do anything close to that to our daughter, especially when the act clearly went WAY beyond a fit of rage. But less obviously, I am even more positive that there is no possible way that we would have stayed together for many years afterwards, even if the case didn’t become one of the most intensely covered in history (it is widely believed that couples who lose a child, even under innocent circumstances, are at greater risk of divorce).

From a purely human standpoint, it seems very clear to me that had the Ramseys really conspired to commit/cover-up this crime that there is no way that they ever could have stayed together as genuinely as they did until Patsy died of cancer almost ten years later. There is no scenario I can think of where each would have each other so blackmailed that one wouldn’t have eventually, if not immediately, turned on the other (the police presuming that one would “flip” on the other if they just applied enough pressure helped birth tremendous misinformation in the media). This is especially the case since Patsy’s death was far from sudden and she could have easily either confessed or ratted out John by leaving a note for after she died. Conversely, if Patsy was guilty, why would John not at least imply that suspicion now that she is dead?

Instead, when you watch the many interviews the couple did together (in many of which Patsy is extremely convincing, with or without pageant training) it is apparent that they do not have the disdain for each other which would have instantly manifested itself if they were involved in such a hideous conspiracy. Instead, I see two people who, having somehow endured the worst that life could possibly throw at them, were still somehow in love until the very end.

To me the most important lesson of the Ramsey case is understanding the dangers of law enforcement and the news media jumping to what seems like a reasonable conclusion and then instantly rejecting as illegitimate all other possible scenarios. Once prominent people, especially while under a microscope, pick a lane, they are naturally so invested in being “right” that any further investigation is either stunted, or flat-out discarded.

When it comes to the news media, this motive is further exacerbated by the insatiable thirst for ratings. Wood estimates that, over the past twenty years, all media outlets combined have probably made over a billion dollars on this case. “The media continues to be willing to do anything they have to in order to profit from the murder of this child,” says Wood. “It’s unconscionable.”

This case also shows the incredible difficulty of reversing a false media narrative, especially without a trial to help do so. My guess is that there won’t be a trial in the coming defamation case against CBS either, because the TV network won’t be dumb enough to take the issue that far. So while the many false narratives of this case will never be fully corrected, it is possible that at least one outlet will be paying at least a real price for perpetrating falsehoods and damaging lives for ratings.

John Ziegler is a nationally-syndicated radio talk show host and documentary filmmaker. You can follow him on Twitter at @ZigManFreud  or email him at [email protected]