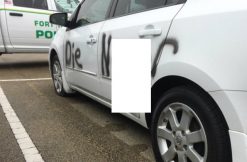 Military police at Fort Hood have confirmed they’re looking into the reported vandalism of a soldier’s car with the words, “Die N—r.”

“My best friend of 22 years, US Army Staff Sergeant Jonathan Charlot‘s car was DESTROYED by racial hatred,” Texas man John Martinez wrote on a Go Fund Me page to repair the car. He said that on December 23, Charlot, who is black, discovered that vandals spray-painted the words on the side of his vehicle, slashed his tires, and doused the inside of the car with a “large volume” of gasoline “rendering it un-drivable.” This all happened on the grounds of Fort Hood itself in Killeen, Texas, Martinez said.

John Miller, a Fort Hood spokesman, confirmed to KDHN that the Criminal Investigation Division are investigating the incident. They’ve got their hands on the car for the meantime.

And as for Charlot, he had this to say: “It’s disheartening, if you will. It’s an older car and was having some issues, so it had been sitting there for a while.” He said the incident made him feel “disgruntled, unwanted—that the America I love isn’t the same anymore.”

[Screengrab via Go Fund Me]