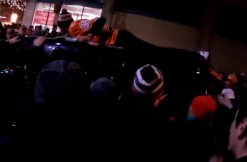 Police in Denver, Colorado were having none of fans partying downtown Sunday night. After the Broncos won the Super Bowl, fans skipped the bars and started celebrating on the street, but you know, things allegedly started getting ugly, so police turned up.

12 people were arrested as of 12:45 a.m. Monday, according to the Denver Post. What’s been alleged? Police spokesman Sonny Jackson told the Post it was things like criminal mischief, starting fires, gun-related charges, and (oh my god) throwing things at cops.

“When people acted out toward the cops, they retaliated,” Tamrick Ortegon, 21, told the Post. “It’s reasonable when you get a bottle thrown at you. I saw a beer bottle go through the back of a cop car.”

Police, in riot gear, broke the crowd during pepper spray, pepper balls, and batons. Check out the scene below via The Denver Channel:

Jackson mentioned no cops were hurt, though the police cruiser’s window was smashed. Otherwise, you’re talking about trash cans and patio furniture getting turned over at a mall. Some other property damage.

“Overall, things went pretty well,” Jackson said. “There were a handful of people who were somewhat unruly.”

#DPD Thank you to the thousands who peacefully celebrated #SB50 this evening. We made only 12 arrests, with no major reported injuries.

But not everybody is pleased with the official response. “It’s a mess down here,” Jessica Palmer told RT. “All of this police stuff is so excessive. If there’s something that goes down, then I guess I’m glad there are so many around, but otherwise stand back. Everyone is just trying to celebrate.”