Lawyer Accused of Begging for Sex with Pill-Addicted Client 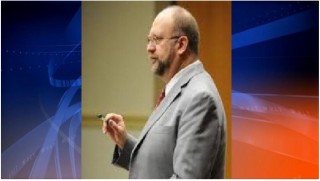 The Legal Profession Blog reports that the Tennessee Supreme Court has imposed a 1-year suspension on Knoxville attorney Robert Vogel who according to a report in the Knoxville News-Sentinel was investigated a secret panel of the US District Court.  This is a part of what the News-Sentinel reported:

“Vogel was appointed in 2012 to represent the onetime girlfriend of the head of a $6.5 million West Knoxville pill distribution network. He began ‘begging’ her for sex, and she complied, telling investigators she felt Vogel ‘held her future in his hands’ because she faced serious federal prison time and was still using pills while freed on pretrial release in the case.

“The woman, described as ‘half” Vogel’s age in the hearing panel decision, tried to end the sexual relationship, offering to send a friend ‘who would be more willing to engage in sexual relations with Mr. Vogel.’ Vogel did, in fact, have sex with the friend but was caught by his wife and children when they walked in on the pair at his office.”

As the Supreme Court of Tennessee observed, the victim was a―young, drug using, court-appointed client who was under federal indictment for drug related charges. By reportedly making sexual advances towards his client, engaging in a sexual relationship with her, pleading with her on one occasion to engage in a sexual relationship after she expressed her reluctance to do so, and continuing to serve as her attorney, attorney Vogel failed to safeguard the trust of a vulnerable client and exploited his fiduciary role.

Attorney Micahel Garofalo resigned amid allegations that over a period of years he sent hundreds of sexually harassing emails to two women on his township email accounts.  He was arrested a few days after stepping down from his position with the two NJ townships and then arrested at his home in Wantage, NJ on unspecified domestic charges.

This unusual case involves an unemployed lawyer, Todd Gorman of Secaucus, NJ– who met his girlfriend on an online suicide forum, a forum for those researching and discussing methods of committing suicide.  The defendant, a highly educated, former military officer moved in with his girlfriend and on the night of the alleged assault giving rise to the charges against Gorman. Gorman had allegedly consumed alcohol and pills and in a rage is accused of repeatedly stabbed the victim.  His defense counters that Gorman found his girlfriend with self-inflicted knife wounds and he was trying to prevent her from doing any further injury when she turned on him.  The victim had twice previously attempted suicide and within a year of the charges against Gorman had in fact killed herself.  The jury began deliberating Thursday afternoon following instructions from the court.

It’s remarkable that in this day and age any graduate of a law school in this country would think it appropriate to send or receive or save on office computers, racist emails.  But as we see from the example of the Justice Eakin (Commonwealth of Pa. Supreme Court) they do, even at the inexplicably highest levels.  So this morning, the Dallas Morning News is reporting that the Dallas DA’s office is conducting an investigation of their staff.  An interesting note, the article at the link reports that a black Dallas County DA assistant was reportedly dismissed after calling a black officer an “Uncle Tom.”

In an Onion-ready headline, the Detroit Free Press  is reporting that the Michigan judicial ethics prosecutor is under an ethics investigation for suppressing emails that exonerated a Judge who was alleged to have intervened in a DUI case for a court intern.  According to reporter Brian Dickerson:

“It could prove much ado about nothing — or bring a decades-long debate over the fairness of the judicial discipline process to a boil just as hearings begin in a high-profile case against Oakland County Circuit Judge Lisa Gorcyca, [the Judge who ordered children sent to jail in a custody case last year.]

Certainly, the Michigan courts have had withstood considerable embarrassment with the removal of Judge Wade McCree who fathered a child with a complaining witness who appeared before him in a child support case.
William Crosby is a contributor at LawNewz.com. He also authored the Bad Lawyer Blawg.

[screengrab via WVLT via Linked in]