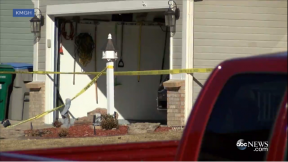 While Craigslist may help you find a roommate or a couch, it may also have more sinister consequences. For a Colorado man, the dangers of the use-at-your-own-risk website became all too real on Sunday.

One man is dead after a Craigslist-motivated home invasion went awry in Colorado. According to the Jefferson County Sheriff’s Office, two men went to a man’s home in response to a Craigslist ad, only to overpower, subdue and tie up the homeowner. In a Hollywood-esque spurt of heroism, it appears the man was able to break free, grab a gun and shoot one of the suspects attempting to steal his car. That suspect is now dead. The other suspect is still at large with what police say may be a bullet-riddled vehicle.

Sheriff’s spokeswoman Jacki Kelley said it’s too early to speculate whether the homeowner will face charges in connection with the fleeing suspect’s death.

As many gruesome killings, including the murder of Julissa Brisman by medical student and “Craigslist Killer” Philip Markoff, have reminded us, not all intentions are pure on the popular classifieds site. A 2014 study by Law Street “identified 58 murderers and 45 murder victims connected to Craigslist postings” from June 2013 to June 2014 alone.

Craigslist’s frighteningly bare “Legal” section drives that point home. As the Latin consumer warning goes “caveat emptor.” “Buyer beware” has a different connotation these days. The “beware” is a two-part warning: beware of what you’re buying, and beware of your safety.The risk is on you!