Christian Group Sues to Get Rid of Nation’s Only ‘Pissoir’ 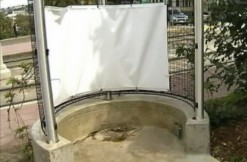 A Chinese Christian group, and several San Franciscans are suing the city over an outdoor urinal called a “pissoir.” They’re common enough in Europe, but San Francisco’s is the first of its kind in the United States. And it might be the city’s last.

“Persons urinate into the hole in public view,” said the lawsuit, issued April 14 at a California court. “There is no signage, accessibility for persons with disabilities, and no place to wash hands.” The suit also claims it discriminates against women because it’s inconvenient for them to use.

Built for $40,000, the pissoir is situated right in Dolores Park, right at the corner of 20th and Church streets. Its opponents decry it in anything but polite terms.

Brad Dacus, a plaintiff attorney and president of the Pacific Justice Institute, told NBC San Diego the pissoir is a “slap in the face” to passerby. He promised to take the case to the Supreme Court if necessary.

San Francisco Supervisor Scott Wiener talked to NBC San Diego, criticizing the lawsuit’s claims. He said that 26 other toilets are available in Dolores Park for women and wheelchair-bound people. Also, more privacy screens will be added to the pissoir. Wiener said the pissoir was added to stop guys from peeing on private property, “and to make it easier for people to go to the bathroom.”

The plaintiffs are suing for costs, attorney fees, and of course, to get the pissoir removed.