Bus Driver Fired After Viral Video: ‘I Live in America and It’s an English-Speaking Country’ 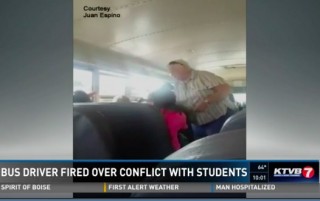 An Idaho bus driver was fired after a tense confrontation captured on video with some Hispanic students. The fight drew even more outrage after the video showed the bus driver reportedly pouring water on one of the students. The Northside Bus Company confirmed to KTVB  that bus driver, Mary Black, was fired.

“She tried to take his phone away and when she didn’t get to do that, she just grabbed the water bottle and started getting him wet,” Brayan Alvarez, who took the video with his phone, told a local media outlet.

“I don’t understand Spanish. I’m not going to learn it. I live in America and it’s an English-speaking country. So if you want to speak to me, speak to me in English,” Black said to the students in the video.  The incident apparently started after a student threw a water bottle on the bus.

A student who spoke to the local T.V. station said that this isn’t the first incident they’ve had with this particular bus driver.  The student said she told another classmate that he wasn’t allowed to speak Spanish while riding the bus. While the bus driver has been fired, the company would not go into further details due to this being a “personnel issue.”