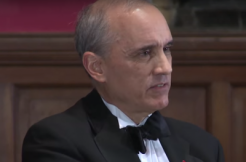 On Thursday, the president of the Freedom from Religion Foundation sued the U.S. House of Representatives chaplain, who denied a request for an atheist invocation.

“The current House Chaplain, Father Patrick Conroy, has imposed requirements for guest chaplains that discriminate against the nonreligious and minority religions, and has explicitly refused to allow Plaintiff Dan Barker, who actually met the requirements, to serve as guest chaplain because Barker is nonreligious,” the lawsuit, filed in D.C. District Court, states.

The Freedom from Religion Foundation is an organization that pushes for separation of church and state. Not afraid of litigation, they once threatened to sue a Texas school over cheerleader banners with religious themes.

Barker, ironically a former Christian pastor, claims via the lawsuit that he’d met with Conroy’s assistants so he could be a guest chaplain, and do an invocation. (Guest chaplains are a regular part of House meetings.) He apparently met all the requirements, even getting sponsored by Congressman Mark Pocan.

But after Conroy allegedly voiced doubts about Barker, and months passed without confirmation, the Chaplain’s office told Barker they didn’t think his requests were “genuine.” The lawsuit said the formal denial came in December, after an 18 month process.

The plaintiff said that he worried his atheist leanings caused Conroy to be harder on him than on other guest chaplains.

“Barker was reluctant to provide his remarks because he believed that Chaplain Conroy was imposing requirements on him because of his atheism that the chaplain would not impose on other guest chaplains, including a more substantial vetting process and submitting the invocation for pre-approval,” the lawsuit states.

The lawsuit also said guest chaplains are overwhelmingly Christian, disproportionate with the U.S. population. Reportedly, no atheists performed the invocation from 2000 to 2015.

By turning down Barker’s request, Convoy allegedly violated the First Amendment, and the due process clause of the Fifth Amendment.

Thursday is the National Day of Prayer.

[image of Barker via the Oxford Union]
–