Another Militia Tried to Do Security for the Oregon Group 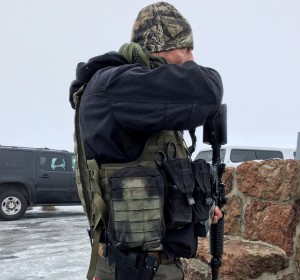 Another weird twist in the occupation of a Federal building in Oregon. Another militia tried to help out the Oregon militiamen who took over the Malheur National Wildlife Refuge. A rep for Oregon leader Ammon Bundy reportedly turned down their help Saturday. They dutifully walked away, and now we’re thinking, One armed group tried to do security for another armed group. What?

Armed militiamen led by rancher Ammon Bundy have occupied the Wildlife Refuge since January 2nd. And this isn’t treated as terrorism, why? No deaths and injuries have been reported, but the situation is dicey.

Bundy’s pap, Cliven, started a faceoff with his own armed group against federal authorities in 2014 when he refused to pay grazing fees. The Feds backed off, not wanting bloodshed, but Cliven took it as a victory of sorts.

He defended his use of armed people against the government in an interview with GQ. “Without the militia and without the media, we would be dead.”

Now his son Ammon is following in Dad’s footsteps, which is heart-warming in a seditious kind of way.

It’s gotten all kinds of attention from likeminded folks, such as the Pacific Patriots Network. They’re the militia group who tried to help out Saturday, but were turned away like Charlie Brown asking for a date.

Led by Brandon Curtiss, the “Network” is some kind of collection of groups from Oregon, Washington, and Idaho. (What, are you guys too good for Wyoming?) They carried rifles and sidearms, and wear military attire with bulletproof vests.

“We are not the militia, and we are not a militia,” Curtiss said. He and his group just wanted to “de-escalate” the situation by setting up a perimeter around the area.

So these guys AREN’T a creepy paramilitary group. They’re just an organized association of fellas with weapons and training, operating without official outsight, setting up a perimeter. Seems legit. Carry on.

Can we discuss where we’ve come right now as a country? Militiamen are protecting militiamen in Oregon from the Feds. The big scary Feds who are letting the Oregon dudes order out for food and buy tampons.