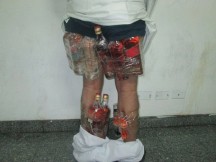 A man apparently wanted booze so bad, he smuggled a bar’s worth in his robe, officials say. We’re not kidding. Check out that picture. It’s like this guy was prepping for an apocalypse. Lots of hard liquor, including what looks like Johnnie Walker. Nice choice.

Saudi Arabian custom officers stopped him when he allegedly tried entering the country with his stash. Alcohol is actually illegal in this county. They take it so seriously that lawbreakers face a prison sentence and flogging. No way. This news article just became an editorial: This guy isn’t a criminal, he’s a freedom fighter.

Alcohol smuggling is common enough in Saudi Arabia, according to the Express Tribune. One guy attempted to smuggle 48,000 of Heineken in November. Last week, customs officials seized two shipments of alcohol. 415 bottles were hidden all over a vehicle. Smugglers were so thorough they also slipped 83 liters of liquor into the fuel tank reserve of a truck.

Maybe one day officials there will realize prohibition doesn’t work. Look at the U.S. Constitution. The 18th Amendment shot down the manufacturing and sale of alcohol, then the 21st Amendment went ahead and essentially stated, Whoops, that was silly. Better let the states decide how to handle that question. Some states in turn passed the buck to cities and counties. Even then, it’s illegal to sell or make this stuff in very few American places.