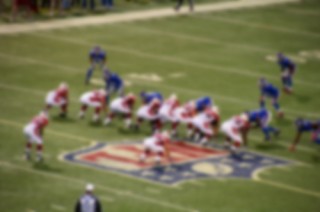 New York State Attorney General Eric Schneiderman has been no stranger in defending the right of consumers, especially when a sports entity is involved. His most recent demonstration of this happened in November 2015, when he declared daily fantasy sports websites like FanDuel and DraftKings a form of illegal gambling. It prompted a massive rally outside the NY Attorney General’s office in Manhattan and has subsequently led to a very tense legal battle in the courtroom. His most recent fight, though, involves the anti-competitive and potentially fraudulent activities of websites that sell tickets to events, like NFL games, to consumers.

In a very detailed 44-page report released to the public on Thursday, Attorney General Schneiderman explains in great detail the incessant activity of scalping on websites that allows users to resell their tickets to major events like concerts or sporting events if, for some reason, they can’t attend, don’t want to go, or just want to make money. According to this report, ticket brokers use what are called “ticket bots” to buy as many tickets as they can (specifically in places where consumers would ordinarily want to sit to watch an event) and in turn, these tickets are jacked up in price, on average 49% more than the ticket’s face value. Additionally, consumers are subjected to paying high processing fees in addition to paying for the tickets themselves.

What  is most alarming is that sports teams are apparently involved in these practices. According the Attorney General’s report, ticket issuers, such as select NFL teams and the New York Yankees, have implemented “price floors,” which means that a consumer cannot resell a ticket usually below the face value of the ticket. This works to the consumer’s disadvantage because if the consumer wants to sell a $350 face value ticket at $200 to go see an under-achieving NY Giants team play, he can’t because of the price floor. And as such, the potential purchaser of a ticket misses out in the opportunity to buy a lower-priced ticket. Here is another dilemma is created because of this price floor: “[B]uyers of tickets on [NFL] Ticket Exchange or other sites with price floors are frequently not informed that the tickets they are buying are subject to a floor,” the AG’s report states. “It is therefore easy for buyers to be fooled into believing what they are paying is the market price for a ticket, when in fact the buyer is paying a price artificially inflated by a price floor.”

The report sums up that action must be taken, primarily through regulating and watching ticket brokers to make sure they are in compliance with NY law on ticket “scalping,” which was decriminalized in 2007 according to the AG’s report. Attorney General Eric Schneiderman, though, has encouraged New York State legislators to enact new laws that would criminalize illegal ticket sales, including the use of bots.

The NFL has responded to this report, stating that fans who want to sell their tickets do not have to use NFL Ticket Exchange. The NFL further added that no restrictions are imposed on a fan to sell a ticket for as low or as high as he wishes. The Associated Press has reported, as per an anonymous source, that the NY Attorney General’s Office is looking into removing “price floors” altogether as a remedy to this issue.

In looking at this report, I have to agree with Attorney General Schneiderman’s position here. I’m sure I can count with more than one hand the number of times I thought I got ripped off because of a high ticket sale from these ticket vendors. The bottom line is that consumer fraud is an everlasting and rampant issue and it is the duty of our elected officials, like Attorney General Schneiderman, to protect society and perform practices that are in the best interest of the people. New York State already has laws in place that are designed to protect the consumer from fraudulent activities of ticket resellers. But then again, laws are always evolving and regulating laws and tailoring them must be a constant. With the news of these fraudulent and illegal ticketing activities going on, it’s only right to refine laws that prevent these ongoing practices from occurring.

At the end of the day, all 32 NFL teams combined are worth nearly $63 billion. The NFL has transformed from being a spectacle to being a financially lucrative business. Attorney General Schneiderman’s legal battle with the NFL on price floors maybe reminiscent of David and Goliath, and while I think it will be an incredible uphill battle to fight, I feel confident that adjustments can and will be made. Surely, the NFL Ticket Exchange won’t suffer if price floors are removed. In fact, maybe more fans will feel far more inclined to use NFL Ticket Exchange rather than StubHub to sell their tickets.

For now, we have to commend Attorney General Schneiderman for the efforts he’s taking in protecting the consumer. “AG Schneiderman has taken what could be a first step in a protracted period of challenges to NFL ticket practices,” says Prof. Mark Conrad, Director of the Sports Business Program at Fordham University’s Gabelli School of Business, to LawNewz.com. “Other states could launch their own investigation and state legislatures may decide to enact legislation to create an open market in the ticketing industry.”

Think twice before you buy those tickets because you may be the victim of some serious fraud.