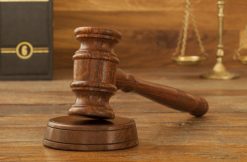 Their names were Peta Frampton and Christopher Farmer. Volunteer firefighters discovered their bodies off the coast of Guatemala in 1978, and now, almost 38 years later, there’s been an arrest. Federal prosecutors say California man Silas Duane Boston tortured the couple, tied them up, and tossed them off a boat 38 years ago. According to an FBI complaint obtained by The Sacramento Bee, Boston met the British nationals in Belize and offered them a boat ride to Mexico. There was apparently an argument and that allegedly escalated to the double murder.

Boston, 37 at the time, has lived a long live. The 75-year-old showed up to court Friday, bearded, gray haired, in a wheelchair, and wearing a hearing aid.

“He didn’t receive all the batteries for his hearing aid, and it’s been difficult to communicate with him in jail,” federal public defender Douglas Beevers said, according to the outlet. We reached out to him for comment, and got a reply from fellow public defender Heather Williams.

“We should all be concerned when, though there is no statute of limitations for murder, the government relies on statements 40 years after the crime,” she told LawNewz.com. “Should anyone be able to keep silent for 40 years, then accuse and put someone in prison? For Mr. Boston, a guilty plea or finding to his current charge means not just a life sentence, but also a death sentence.”

The FBI said they got a tip regarding the murders when investigating the 1968 unsolved disappearance of his wife. His two sons, who traveled with him on his boat, implicated him, according to The Business Insider. Another witness, a friend, said Boston bragged about the killings.

The defendant pleaded not guilty to two counts of first-degree maritime murder, which carries a possible death penalty. However, prosecutors have said they’re taking that off the table, so it’s only a possible life sentence at this point.

Update – December 9, 3:32 p.m. EST: Added a statement from the defense, and mentioned that Boston pleaded not guilty.

[image via Izzet Ugutmen and Shutterstock]