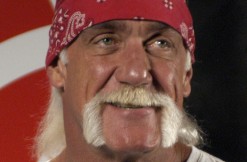 Hulk Hogan is scheduled to testify Monday afternoon in a Pinellas County, Florida courtroom. The pro-wrestler, whose real name is Terry Bollea, is suing online gossip mag Gawker for publishing an excerpt of a 2006 sex tape with him and the wife of a former friend, shockjock Bubba “The Love Sponge” Clem.

Hogan says the tape was recorded without his knowledge, and seeks $100 million in damages for invasion of privacy. In an opening statement Monday, his attorney said Gawker published the sex tape knowing, but not caring, that it would hurt the pro-wrestler.

Gawker claims they’re protected by the First Amendment since Hogan is a public figure and openly talked about his sex life. It’s worth mentioning that he has reached a $5000 settlement with Clem, who is also testifying later, but plans on pleading the Fifth Amendment. You can watch the testimony here. Livestream provided courtesy of Wild About Trial/Crime Watch Daily

Update — March 7, 01:28 p.m. EST: An earlier version of this story stated that Hogan’s testimony would happen at 1 p.m. Instead, it was Heather Clem, ex-wife of Bubba Clem, who tesified. Hogan’s testimony was moved back to 1:30 p.m.
–