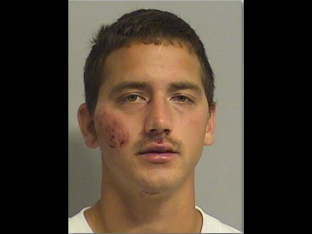 An Oklahoma man was arrested on Monday night after police said he stole a cop car and led officers on a wild chase, while streaming the parts of the incident on Facebook Live.

Police told NewsOn6.com in Tulsa the incident began around 8:00 p.m. when a female officer left her police cruiser unlocked, with the engine running during a coffee break.

In what sounds somewhat like a scene straight out of the movie Varsity Blues, Justin Pinney, 25, is accused of jumping in the unattended vehicle and speeding off into the night.

Just when you think it could not get any crazier, police say Pinney used the officer’s iPad to stream the chase on Facebook Live.  Several videos that appear to have been taken during the chase can still be viewed on Facebook.

In one of the videos, a man can seen driving the cop car and struggling to figure out how to turn on the lights and sirens.

Police say Pinney led officers from multiple agencies on a chase for more than 30 minutes, traveling all over Tulsa County with speeds reaching over 100 miles per hours.  Police say they even briefly lost track of Pinney, but soon found him again and followed him to a home they believe belongs to his parents.

A news reporter said Pinney was shouting as he was taken into custody about how “dumb” the cops were for leaving the keys in the car in the first place.

Pinney was booked in Tulsa County Jail on multiple charges, including eluding and resisting arrest and felon in possession of a firearm.