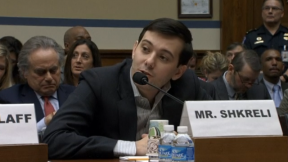 Martin Shkreli, the now-infamous “pharma-bro,” invoked his Fifth Amendment rights repeatedly this afternoon — one smirk at a time — as he appeared at a U.S. congressional hearing in Washington D.C.

While the boastful 32-year-old was selectively taciturn on Capitol Hill, his vow of silence was reserved for the House Oversight and Government Reform Committee. Soon after the hearing, Shkreli ignited a Twitter firestorm with a barrage of Trump-like tweets of critique, and retweets of support.

Hard to accept that these imbeciles represent the people in our government.

@MartinShkreli would have ripped those buffoons a new one had his lawyer allowed him to speak. — JoeNatural (@ChinaStockPro) February 4, 2016

At the advisement of his attorney, Benjamin Brafman, Shkreli uttered just a few iterations of, “On the advice of counsel, I invoke my Fifth Amendment privilege against self-incrimination and respectfully decline to answer your question.”

“No person shall be held to answer for a capital, or otherwise infamous crime, unless on a presentment or indictment of a grand jury, except in cases arising in the land or naval forces, or in the militia, when in actual service in time of war or public danger; nor shall any person be subject for the same offense to be twice put in jeopardy of life or limb; nor shall be compelled in any criminal case to be a witness against himself, nor be deprived of life, liberty, or property, without due process of law; nor shall private property be taken for public use, without just compensation.”

The Amendment affords all U.S. citizens with protections against self-incrimination through testimony. The operative language being, “nor shall be compelled in any criminal case to be a witness against himself.”

Shkreli was set to appear in the nation’s capital to discuss his company’s price-gouging of the life-saving medicine Darapim, but instead appeared aloof and disinterested. At one point, U.S. Representative Elijah Cummings asked him, “Are you listening,” to which a shifty-eyed, pencil-twirling Shkreli tersely responded, “Yes.”

Shkreli was arrested in December on securities fraud and wire fraud charges. He was freed on a $5 million bond.