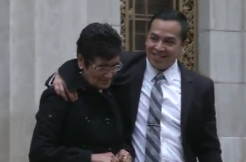 Depending on who you ask, Cesar Vargas is either an “undocumented” or “illegal” immigrant. That doesn’t matter anymore, though. He’s now a lawyer for an American jurisdiction. This is the end of a long journey for the 32-year-old, who came to the U.S. from Mexico when he was a child.

Vargas was sworn in on Wednesday to practice law in New York State, and he’s proud that he can tell his mom he’s a lawyer.

“It was an amazing moment,” he told ABC 7 NY. “It felt like the day was never going to come. But it’s here, through the support of so many people, my family, my mother.”

“Now that he is finally an attorney, I am so proud of him,” said his mom, Teresa Galindo.

Waitaminute, you might ask. Shouldn’t his residency status get him denied? It was at one point. Vargas was denied in 2012, a year after he passed the bar exam.

But around the same time, the Obama Administration instituted a new policy with the Secretary of Homeland Security. It’s called Deferred Action for Childhood Arrivals. “DACA,” for short. Under this policy, undocumented immigrants can receive certain legal protections, but to get this, they have to be eligible. For example, they had to come to America before June 15, 2007, and be younger than 16 when they arrived. Relax, Donald Trump: Convicted criminals don’t qualify.

Do the math for 32-year-old Vargas, who has been in the U.S. since he was 5. He successfully applied to be covered by DACA in February, 2013, but it was only last year that a panel of judges ruled unanimously in his favor.

“There are amazing people who are there to support you,” Vargas said. “You just need to make sure that you tell your story, tell your story that regardless of where you’re born, you be anything and that you’re an American.”

[image of Vargas and his ma via ABC screengrab]
–