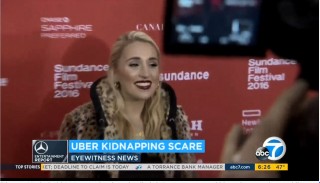 Los Angeles-based director Kevin Smith’s teen daughter says she was nearly kidnapped by two creepy “fake” Uber drivers who approached her while she was waiting for her car on a California sidewalk. After the terrifying event, she sent a warning message out to tens of thousands of Instagram followers. Her father also tweeted about what happened.

Harley Quinn Smith described what happened as the following:

“I was just standing outside a Starbucks in Brentwood where I was waiting for my uber when a large, beige car drove up to me and tried to get me to think they were my uber. There were two white men (age 20-30) in the driver (blond hair) and passenger (brown hair) seat with an uber sign on their front window, but they were most definitely not uber drivers. When I asked who they were there to pick up, making sure it was the right car, they wouldn’t answer me and said to get in the car. They did not have the uber app on their phone and were clearly just two disgusting dudes trying to kidnap a girl standing on her own.”

To make her feel better, her father, Kevin Smith, made her a cake which read “Sorry men suck” in frosting: 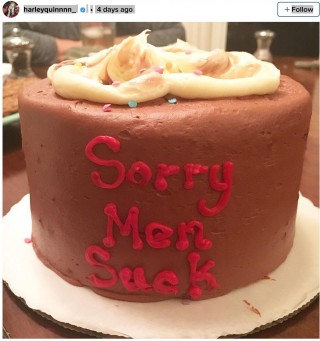 Harley wrote on her Instagram, “Just when I was about to lose faith in humanity, my dad got me this cake and made me remember that some people, like himself, make the world a lot better.”