Outrage After Accused High School Rapists Only Given Small Bail 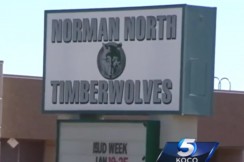 $5000. That’s what an Oklahoma judge set the bail of four high school wrestlers accused of raping two minors. That means each of the defendants only has to pay $500.

This even surprised one defense lawyer. Attorney Jason Lowe told KOCO-TV that he’d never seen a bond this low. Then again, he mentioned that bail hearings aren’t about retribution.

“Bond is based on whether the individual is a flight risk, [for] one” Lowe said. “And the Supreme Court has ruled the bound amount should not be used as punishment to a defendant.” That’s because no one’s been convicted yet.

Tanner Shipman, 18, Sage Gandenberger, 17, and Chase Smith, 16, face counts of rape by instrumentation. The fourth defendant, 17-year-old Hunter Matthews, is accused of only one count of rape by instrumentation. They’ve all plead not guilty, and were ordered not to contact the alleged victims. Lowe mentions that the juveniles of the group would get lesser sentences (like not having to register as sex offenders) if convicted. Shipman is the only adult of the group.

Charges stem from a reported Jan. 9 incident. All of the defendants wrestled for Norman North High School in Norman, Oklahoma, and they’d been on a bus ride after a tournament. It was during that ride that prosecutors say a 16-year-old teammate was sexually assaulted first. Then a 12-year-old was allegedly raped too.

The reported assault continued after the bus reached school, where the 12-year-old was raped again between two parked vehicles, authorities say. In the aftermath, an adjunct coach was fired, another suspended, and several students were suspended from Norman North.

In any case, the defendant’s next court date is scheduled for April.

The 16- and 12-year-old are both boys, though most rape allegations tend to be made by women. Male-on-male sexual assault isn’t really talked about, though the Justice Department found that from 1995 to 2010, 9 percent of sexual assault victims were guys.