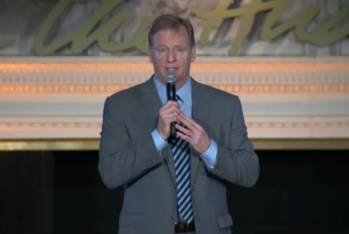 NFL Commissioner Roger Goodell announced on Thursday the league will create a “Rooney Rule” for women that will require all NFL teams to interview women for executive positions.

Goodell announced the decision during his opening remarks at the first ever NFL Women’s Summit at Super Bowl 50 in San Francisco, CA.

“We have something called the Rooney Rule which requires us to make sure when we have an opening at the team level or the league level that we are going to interview a diverse slate of candidates,” Goodell said. “We are going to make a commitment and we’re going to formalize that we as a league are going to do that for women at all of our executive positions.”

2015 was a big year for women in the NFL.  The league hired its first full-time official, Sarah Thomas, and Goodell told the summit attendees that he expects to hire more in the future.  The NFL will also have its first full-time female coach next season when Kathryn Smith takes over as the Buffalo Bills special teams coach.