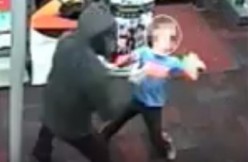 I almost spilled coffee on myself when I saw this. The Montgomery County Police Department have released surveillance footage of a small boy trying to fistfight an armed robber.

It’s like this: On Friday, two suspects with handguns stormed into a GameStop in Silver Springs, Maryland, cops said.

“One suspect initially ordered three customers, including a young boy, against the wall near the counter,” read a MCPD statement.

Look at that! Those weren’t even flimsy, little-kid punches. The “young boy” was really going for it. If you’re a parent, you’re probably losing your mind right now.

No injuries were reported, though. The suspects stole from the register as well as what the statement calls “personal property.”

Police still need to find who did this.

“The suspects are decribed [sic] as black males in their 20s, approximately 5′ 6″ tall and weighing 170 pounds,” they said. “They were wearing black, hooded sweatshirts, black pants, gloves, and masks.”