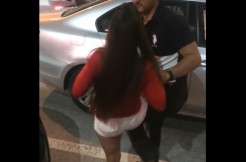 Anjali Ramkissoon reportedly made that last mistake Sunday while getting videotaped. She’s a fourth-year resident with Jackson Health System in Miami. Apparently, they don’t give med school students lessons in being chill.

In the video uploaded Tuesday, Ramkissoon lost it when an Uber driver ignored her. But the driver had been hailed by another group, according to the person who took the footage (and was the one who called the cab):

It wasn’t clear if Dr. Ramkissoon was aware of that, but in any case, she ripped the cab driver: “You don’t know who the f—k you’re messing with right now.”

The driver apparently didn’t know who he was messing with, and refused. Ramkissoon—who, yes, is alleged to have been drunk—yelled, and tried to kick his nuts. The driver was like, nope, and shoved her back, but the plucky doctor was right back on her feet. Then video shows her getting into the car.

“Get in the f—king car. Get the f—k in this car, you f—king piece of shit!” she asked. Oh, so that’s how you’re supposed to hail a cab.

The driver declined, but doctor sweetened the deal by tossing his stuff onto the street. Eventually, she was completely fed up with that crappy service. “I guess that’s it,” she said. “Good night!” So polite.

And when police arrived, they wanted her to talk about it while wearing handcuffs. Driver and doctor eventually hashed things out, and worked out some sort of money settlement, so she won’t face charges (this wasn’t caught on tape).

Too bad Jackson Health System didn’t see them make up. Ramkissoon was placed on administrative leave and removed from all clinical duties.