Video: Unarmed Black Therapist Pleads with Cops Before He was Shot 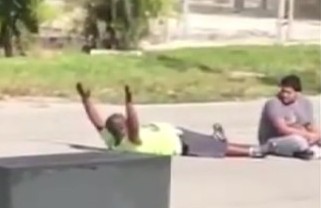 Video released Wednesday shows the moments before and after police in North Miami, Florida shot an unarmed black therapist.

Cops had been called to the area, told that a man with a gun was threatening suicide, WSVN reports. Instead, they found Charles Kinsey and an autistic man on the street. Footage, obtained by Kinsey’s lawyer Hilton Napoleon II, shows Kinsey on the ground with his hands up.

“When I went to the ground, I’m going to the ground just like this here with my hands up,” a hospitalized Kinsey told the news outlet. “And I am laying down here just like this, and I’m telling them again, ‘Sir, there is no need for firearms. I’m unarmed, he’s an autistic guy. He got a toy truck in his hand.”

Kinsey explained his thoughts at the time.

In the video, you can see the moments before and after the shooting, though the incident itself was not depicted.

“I’m like this right here, and when he [the unidentified officer] shot me, it was so surprising,” Kinsey said from the hospital bed. “It was like a mosquito bite, and when it hit me, I’m like, ‘I still got my hands in the air,’ and I said, ‘No, I just got shot.’ And I’m saying, ‘Sir, why did you shoot me?’ and his words to me: He said, ‘I don’t know.’”

The North Miami Police Department told WSVN that they’re investigating the incident, and that the Florida State Attorney is involved, too.

LawNewz.com reached out to police for more detailed comment. We will update if they get back to us.
–