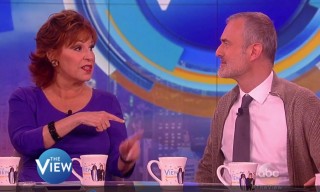 Gawker founder Nick Denton sat down with the ladies of The View this morning to discuss the massive verdict that was handed down against his company over the decision to post a sex tape of professional wrestling legend Hulk Hogan.

About half way through the interview things got a little heated when Joy Behar accused Denton of victim blaming.

As part of a discussion about where he would draw the line on what is newsworthy, Denton said, “[c]elebrities have to exercise some sort of responsibility themselves” with respect to what they chose to talk about.  Denton’s argued that if celebrities wish to make their sex life part of their public image then it is fair game to publish a sex tape featuring that celebrity.

Behar would have none of it, saying, “But you’re blaming the victim in this case!  He is doing what he is doing — you’re exploiting it — and the jury basically said you’re wrong.  They’re saying, ‘Don’t do this anymore because we don’t like it.’”

A bit later Whoopi Goldberg jumped in, going back to a point she made earlier in the interview that it was the publishing of the tape that ultimately brought Gawker down.  She argued that had they just published the story about the encounter it would’ve been fine, however, they crossed the line with the decision to publish the excerpt of the tape.

“There is no way… there is no way you can justify the tape.  I absolutely understand why the ’story’ is newsworthy … I absolutely get that … But you guys… once you [published the video], you took yourselves out of being news folks into being … voyeurs … and that is why I think they got y’all,” Whoopi said.

The interview concluded with Denton refusing to back down, saying if he had it to do over again, he still thinks the story was newsworthy — although he did note that he maybe wished he knew how litigious Hulk Hogan was ahead of time.