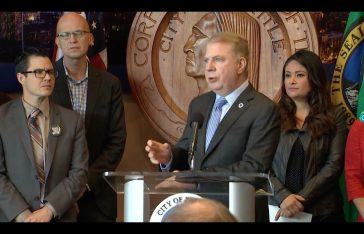 One of President-elect Donald Trump’s top campaign promises has been to cut off federal funding to cities that have enacted “sanctuary city” laws that that prohibit the use of municipal funds on policies that help further enforcement federal immigration laws.  Only time will tell if President Trump and the Republican controlled Congress follow through with the promise.  However, the mayor of one large city on the West Coast is already saying he will continue the “sanctuary” policy, despite the threat of losing federal funding.

KING 5 News reports Seattle Mayor Ed Murray spoke at news conference on Wednesday and was very critical of the President-elect, saying he displayed “racism and authoritarian tendencies” during the campaign.

Mayor Murray also addressed the “sanctuary city” issue and promised Seattle would continue to shelter undocumented immigrants from enforcement of federal immigration laws, despite the threat of losing federal funding.

“It is important because these are our neighbors and we will continue to support our neighbors,” Mayor Murray said.

He added, “By continuing to be a ‘sanctuary city,’ I think we are doing the most American thing we can do.”