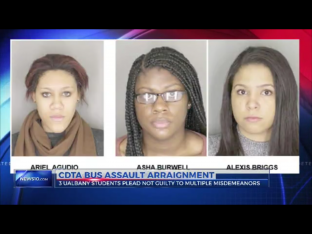 A professor at the University at Albany is struggling to explain away the actions of three African-American female students at the school who authorities say falsely claimed to be the victims of a hate crime at the university earlier this year.

In late January, students Alexis Biggs, Ariel Aguido and Asha Burwell sparked a major controversy on the UAlbany campus after they claimed to be victims of a racially motivated assault by a group of white men and women.  The three women said that they were called racial slurs and were physically attacked during an early morning bus ride while bystanders refused to intervene.

The women’s claims sparked rallies on the university campus and received extensive media coverage, nationwide.  They even got the attention of Democratic presidential candidate Hillary Clinton, who sent out a supportive tweet.

There’s no excuse for racism and violence on a college campus. https://t.co/ADVghl4iEv -H

Late last week, however, the story took an even more shocking turn when the authorities investigating the claims announced charges… against the three women.  Investigators said a review of multiple videos, as well as eyewitness testimony showed no evidence the women were victims of a crime or subjected to racial slurs.

According to the police, interviews with multiple eye-witnesses and several videos show the women were actually the aggressors in the incident, assaulting a 19-year-old white woman, and the three white men whom the women accused of assault were actually trying to break up the fight.

All three women appeared in court on Monday and pleaded not guilty to misdemeanor assault charges.  Burrell and Aguido also pleaded not guilty to additional charges of making a false report.  According to a report, the judge presiding over the arraignment called the charges, if proved, “shameful.”

However, not everyone seems to share the judge’s sentiments that the behavior of the three women, if proven, was shameful.  In fact, one professor at UAlbany is willing to excuse the three women’s alleged behavior because they feel the ends justified the means.

For example, Sami Schalk, an assistant professor at Albany, told the New York Times that the events already served the useful purpose of making white students aware of the micro-aggressions that students of color encounter on a regular basis.

Schalk also told the paper that she had devoted class time to discussing implications of the (made up) bus incident because she is now worried that the women’s “detractors” are failing to consider certain factors such as prejudice and “racialized language” on campus that may have provoked the women into lashing out on the bus.

So, the lesson here appears to be that it’s perfectly acceptable to accuse innocent people of committing a hate crime, so long as the goal is to start a larger dialogue about campus racism.

READ THE UALBANY ANNOUNCEMENT ABOUT THE CHARGES HERE

WATCH THE VIDEO OF THE INCIDENT HERE: