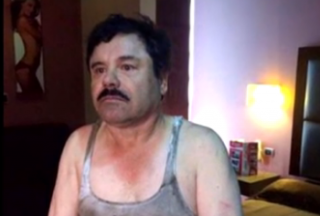 Joaquin “El Chapo” Guzman, the drug lord facing charges in several federal courts, said through his attorney on Wednesday that the client wants to be extradited to the United States from Mexico as soon as possible, the Associated Press reports. The lawyer, Jose Refugio Rodriguez said Guzman is acting in desperation, because guards at his Mexican maximum-security prison won’t let him sleep. Guzman told Rodriguez to negotiate a lighter sentence at a medium-security prison in the U.S.

Officials say that guards at the Altilplano prison wake Guzman every four hours for a head count. Guzman described the practice as “torture” in testimony for one of the cases against him. “I feel like a sleepwalker,” he said. “My head and my ears always hurt and I feel bad all over.” Rodriguez described his client as, “a defeated, humiliated man,” the AP says.

Renato Sales, Mexican national security commissioner, said Monday that Guzman’s human rights are not being violated, mentioning that Guzman escaped from prison twice. The AP quotes him as saying, “Shouldn’t someone who twice escaped from maximum security prisons be subject to special security measures? The common sense answer is yes.”

Guzman was originally fighting extradition, after the U.S. filed a request two days after his arrest. Mexican officials said the process could take at least a year to go through the Mexican court system, according to the AP. Rodriguez says it could be done in just two months if his client drops his appeals. Of course, he says he won’t let go of any defense until he has a deal with the U.S. government.

At the moment, it is unclear which U.S. court would get first crack at Guzman, so right now there isn’t even anyone on the U.S. side to negotiate a deal.