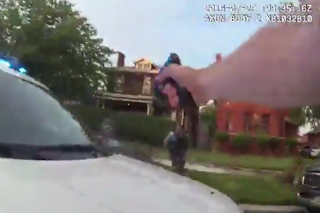 Chicago Police released body camera footage related to the shooting death of an unarmed, black teenager, but the video seemed to show everything but the actual shooting. The footage, shows officers firing at a car that was being driven by Paul O’Neal, 18, that was reportedly stolen before O’Neal crashed it into police vehicles. Video also shows officers chasing after O’Neal after he fled on foot. Shots can later be heard off-camera, and then body camera footage shows the aftermath of the shooting, with officers apprehending O’Neal. Authorities confirmed that O’Neal died from a gunshot wound to the back, the Chicago Tribune reported.

Police Superintendent Eddie Johnson said three of the officers involved violated policy, according to the Tribune, and revoked their police powers. The department forbids shooting at a vehicle if it’s the only threat that officers are facing, yet more than a dozen shots can be seen or heard being fired.

While the police released nine videos from officers’ body cameras just days after the July 28 shooting, it is unknown why footage of the shooting itself is missing. ABC News’ Sunny Hostin told Good Morning America that officers involved in the shooting could face charges for their actions. “He was shot in the back, and the Supreme Court has held that generally you can’t shoot a fleeing felon in the back,” Hostin said. She also mentioned that officers could be seen pointing to body cameras and telling their colleagues to turn them off, and said, “Everyone is talking about a cover-up.”