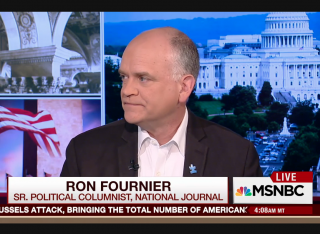 During a panel discussion Monday morning on MSNBC’s Morning Joe about a pair of new reports in the Los Angeles Times and the Washington Post concerning the ongoing FBI investigation into the Clinton private e-mail server, National Journal political reporter Ron Fournier argued that there should be a higher bar to bring charges against Hillary Clinton because she is running for president.

After the initial discussion focused more on the issue of Clinton’s judgment and trustworthiness as well as the likelihood that Clinton set up the server in an effort to evade federal record keeping laws and FOIA requests, program host Joe Scarborough sought to refocus the discussion on the classified information aspect of the investigation.

“Intel officials have been saying to me, and have been angry for some time, not so much about FOIA. They’ve been talking about the reckless disregard for classified information and that there are so many classified documents that both came and went.  When they talked about ‘it wasn’t marked on there’ it is just a distinction without a difference,” Scarborough said.

Fournier responded that those issues are more harmful to Clinton in a political sense because they show she has not been truthful about the e-mail issue from the beginning and voters already understand that Clinton’s “marked classified” defense is purely political spin.

Fournier then pivots to address the legal implications:

This remark seemed to take Scarborough by surprise and he replied, “Actually, the bar is ‘reckless [disregard]’ of classified information….”

Scarborough went on to provide a handful of examples of what would happen to regular people, or even a congressman, if they left out a single piece of classified material outside of a secure area, much less sent or received over 2,000 e-mails containing classified information.

“The scale of this is so remarkable, I do not know how James Comey doesn’t do something definitive, election year or not,” Scarborough said.

Again, Fournier argued that all of that is purely a political issue about Clinton’s judgment that is for voters to decide.

“Politically, there are severe questions about her judgment that voters really have to look into.  Legally, …there is a higher bar you have to get over before you prosecute somebody who is running for president.  That is just a fact,” Fournier said.

“In what statute is that?” Scarborough asked rhetorically.

As the rest of panel broke out in an awkward laugh, Sam Stein, a Huffington Post political writer, jumped in and sort of stuttered his way along in defense of Fournier.

“Well, this is the thing … it is not codified … but we all recognize … and this is sort of the frustration with Clinton critics which is that had she been some sort of underling at the State Department, certainly there would’ve been a different standard applied to her,” Stein said.

“If she were an underling she would already have charges against her.  I have no doubt in my mind,” Scarborough shot back.

This exchange is a perfect example of the groupthink mentality with which many political reporters inside the “D.C. Bubble” treat the Clinton e-mail issue.  Fournier is a good reporter, and he is correct when he says that he has been very tough on Hillary Clinton, so it was surprising to see him fall victim to this type of thinking this morning.

Hillary Clinton’s decision to use a private e-mail server was not simply a harmless error in judgment for which any consequence should only come in the form of political punishment.  As more facts continue to come out, it becomes more clear that she may have blatantly ignored warnings and risks associated with the use of the private e-mail server and it is very likely that she broke the law in the process.

It is concerning that even those who are tasked, in theory, with holding our elected leaders accountable are arguing that Clinton should get a pass, or at the very least that the legal bar should be higher to prosecute her, simply because she chose to run for president.