Student Sues University for Being Kicked Off Ballot ‘for Being Conservative’ 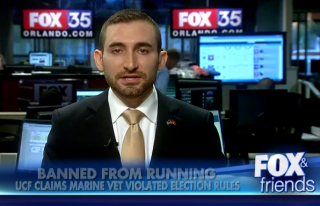 Jacob Milich, a Marine veteran and student at the University of Central Florida, was disqualified from running for student government president, and he claims it’s because he’s a conservative. Now he’s suing the school for violating his free speech.

Milich was charged with violating election rules by using student government email to write campaign notes, testing a campaign website prior to running, and using social media for his campaign earlier than the rules permitted. Milich claims that having notes on his government email account was an accident, and when he used a social media account for the campaign, he didn’t have users yet, and was simply testing it out. He told Fox News on Monday that the charges were “ridiculous” and “not valid.”

The decision to kick Milich off the ballot was made during a secret meeting of the election commission. This is the first time such a meeting was held in secret, according to Milich, who claims it is because he and his running mate are conservatives on a mainly liberal campus. His running mate, Elaine Sarlo, is chair of the College Republicans at UCF.

He’s not the only one who thinks there’s something fishy going on. Jorge Salles resigned from his position as a student government justice after Milich was removed from the ballot. In an op-ed piece for Knight News, an online student publication, he complained about a lack of transparency in the election commission’s decision-making, and said there was a conflict of interest between the current president, the election commission, and one of the other candidates. Salles mentioned that current student government president Cait Zona had already endorsed one of Milich’s opponents. Salles also said Zona selected a number of the people involved in the closed meeting. Knight News itself complained about the closed process to the school’s board of trustees.

Milich offered to drop his lawsuit if the school would reinstate him on the ballot, but they did not take him up on it. The election began Monday morning, and Milich is still hoping he can get it delayed, with him on the ballot.

Have a tip we should know? [email protected]rime.com