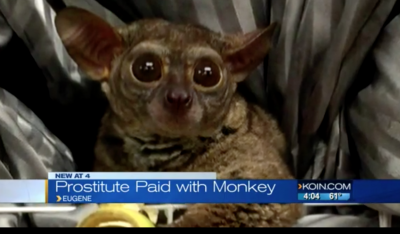 Police in Oregon thought they were simply busting a suspected prostitute.  However, when they moved in to make the arrest they found her in the hotel room along with stolen a bushbaby named Gooey— a small exotic primate native to sub-Saharan Africa.

According to the police, the bushbaby was reported stolen last month from the Zany Zoo Pet Store in Eugene, OR.  KOIN News reports that Zany Zoo Pet Store is owned by a man named Nathan McClain and his wife.  It was McClain’s wife that actually called in the stolen bushbaby report.

So, how did this exotic primate end up in a hotel room with a suspected prostitute?  This is where things get a little strange.

Police say the suspected prostitute told them she was given the bushbaby as a tip for sexual services from a man she identified as Nathan McClain.  When she led police to the man she says tipped her with the monkey, they say they discovered that he was the same Nathan McClain that owns the Zany Zoo Pet Store.

As you can probably imagine, McClain reportedly forgot to tell his wife that he gave away the bushbaby to a prostitute.  Police say the wife had no knowledge of what really happened to the primate when she reported it stolen.

Readers will be relieved to learn that Gooey, the bushbaby, was not returned to the pet store.  Instead, authorities placed him in the care of an animal sanctuary.