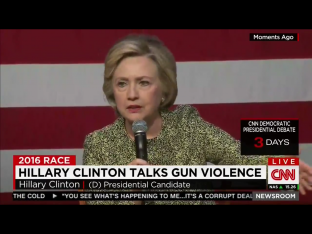 One of Hillary Clinton’s favorite targets this campaign season not named Donald Trump is the National Rifle Association (NRA) and its support of laws like the Protection of Lawful Commerce in Arms Act (PLCAA).  The law was passed by Congress in 2005 and generally provides immunity to gun manufacturers and dealers from civil lawsuits resulting from the criminal or lawful misuse of firearms.

In an almost 180-degree turn from 2008, the new 2016 Clinton now fancies herself as a staunch gun control advocate, and in an effort to highlight her strength on the issue, Clinton often talks about a lawsuit filed by Sandy and Lonnie Phillips, whose daughter, Jessica Ghawi, was killed in the 2012 movie theatre shooting in Aurora, CO.  In fact, she brought it up again today at a rally in New York.

As you can see in the video, Clinton takes dead-aim at the NRA, accusing the group of defending the lawsuit on behalf of several online vendors that sold ammunition, tactical gear and teargas canisters to Aurora shooter James Holmes that he then used in the July 2012 movie theatre attack.  She also says the lawsuit “gave an opening to the NRA to once again intimidate” the judge into dismissing the lawsuit and ordering the Phillips family to pay the defendants attorneys’ fees incurred in defending the online vendors against the claims.

Sure, this stump speech does a nice job of shaping the issue in a way to make it appear as though the big, bad NRA is bullying the little guy — something that is sure to fire up Clinton supporters.  However, and this might come as a shock, Hillary Clinton’s version of this story is at odds with the truth.

For example, court records reflect that the NRA did not defend the lawsuit on behalf of the online venders.  Furthermore, if anyone used the lawsuit as an “opening … to once again intimidate” it was the Brady Center to Prevent Gun Violence who sponsored the suit on behalf of the Phillips in an effort to get a court to mandate unspecified requirements for online ammunition sellers that the Brady Center could not get passed in Congress via the normal legislative channels.  Finally, although they have given conflicting statements over the past several months on the issue, it is likely that the Phillips family will not have to pay a dime of the attorneys’ fee awards out of their own pockets because the Brady Center agreed to help cover those expenses as a condition of filing the lawsuit.

During a court hearing on the defendants’ motion for attorneys fees, the Phillips’ attorneys told the court of their suspicion “that non-parties [the NRA] have provided financial support for the defense of this action.”  The defendants’ attorney, however, flatly denied the accusations, telling the judge that “their clients were responsible for those fees.”  Lawyers are not in the habit in making false representations to federal judges, so there is simply no evidence in the court record to support the claim that the NRA defended this lawsuit on behalf of the online venders.

A further review of court records in the case does reveal that Brady Center attorneys worked closely with the Phillips family’s own attorneys in formulating this lawsuit.  Even the judge recognized the Brady Center’s connection to the case in his order awarding attorneys’ fees:

It is apparent that this case was filed to pursue the political purposes of the Brady Center and, given the failure to present any cognizable legal claim, bringing these defendants into the Colorado court where the prosecution of James Holmes was proceeding appears to be more of an opportunity to propagandize the public and stigmatize the defendants than to obtain a court order which counsel should have known would be outside the authority of this court.

Moreover, the judge also recognized the importance for the defendants to have the opportunity to defeat the frivolous claims at the earliest possible opportunity.

This was an all conceivable claims attack on these internet sellers, attempting to destroy their legitimate businesses and invalidate the federal and state statutes protecting them. Defeating this action at the threshold was important not only for the continuation of their business model, it avoided the probability of negative publicity attendant to the discovery opportunities available under the procedural rules. Those who ignite a fire should be responsible for the cost of suppressing it before it becomes a conflagration. The Brady Center may be pursuing a righteous cause, but the defendants should not have to bear the burden of defending themselves in this inappropriate forum.

“Brady is still fighting for us pro bono and we see no evidence that the Brady Campaign to Prevent Gun Violence will not help us raise funds if and when that time comes,” they wrote.

Based on this article, it is safe to also assume that the Phillips’ were aware of the likelihood they would be required to pay attorneys’ fees in the event they lost the lawsuit as they seem to indicate the existence of a plan to help them raise those funds.  Although, the Phillips have given conflicting statements with respect to this issue, telling some outlets that they might be forced to file bankruptcy. If that is the case, then shame on the Brady Center.

In the same Huffington Post article, the couple added they had decided to drop their appeal of the attorneys’ fees award to refocus their efforts on their ultimate goal of legislative change — something they should’ve done from the beginning.

“[R]ather than risk possibly being ordered to pay even more fees, we are changing our focus from going after these laws in the judicial branch (we have dropped our appeal) to getting them overturned on the legislative level.”