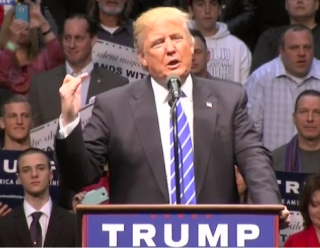 So much for innocent until proven guilty. During a rally in Albany on Monday night, Donald Trump told the revved up crowd that Hillary Clinton was ‘guilty as hell’ regarding the investigation involving her private email server.  This came on the heels of a new Hillary Clinton ad that attacks Trump. The ad goes after Trump for his stance on abortion, highlighting his recent comments (which he later retracted) in which he said he wanted to punish women. The ad also attacks Trump’s  position on Mexican immigrants and Muslim Americans. Trump, not one to hold back, decided to get personal, very quickly on Hillary.

He told the crowd:

“Everybody knows that she is guilty as hell…Everybody. Her whole life has been a big, fat, beautiful lie, it’s been a terrible, terrible, lie. everything about her is a lie.”

Reports indicate that the FBI’s probe into Clinton’s private email server may be wrapping up shortly. The State Department has said hundreds of emails sent through the private server did contain classified information. However, Clinton contends the information was not marked classified when it was transmitted.  In a recent interview on NBC, Clinton laughed off any thought that she would be hauled off on handcuffs over this probe.

“It’s a security review, it is a security review and there are lots of those that are conducted in our government all the time. And you don’t hear about most of them. You hear about this one because it does involve me, so that’s why it gets so much attention,” Clinton said.