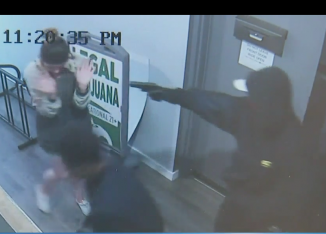 What began as a very dangerous armed robbery at a marijuana shop near Seattle on Sunday ended more like a scene from America’s Dumbest Criminals.

According to KOMONews.com, police say two men, one of whom was armed, forced their way into the Have a Heart marijuana dispensary on Sunday night and tied up the store employees at gunpoint.  As the alleged robbery was in progress, store manager Damon Martinez said he happened to be monitoring a live feed of the store’s surveillance camera system.  Martinez said he immediately called the police and was able to provide the dispatcher with crucial details about the alleged perpetrators.

Martinez told KOMONews.com, “When I saw them open the door, they immediately put a gun on one of the staff’s face, put them on the ground, and I immediately called 911.”

With Martinez providing a sort of play-by-play of the incident in progress, police were able to set a secure perimeter around the building, according to Seattle police detective Mark Jamieson.

Meanwhile, the alleged robbers reportedly continued to go through the store, stuffing marijuana and cash into two duffle bags.

According to Jamieson, the two masked men eventually exited the building, only getting a few steps from the door before being told to stop by responding officers.  The two suspects were immediately taken into custody without incident and booked into the King County Jail.  Police say they recovered a handgun and two duffle bags from the alleged suspects.

“It was almost like the dumbest criminals videos,” Martinez told the news station, speaking about how the incident ended.

The store employees were reportedly able to free themselves, and although still somewhat shaken up by the incident, none suffered any physical injuries.

Marijuana dispensaries in the Seattle area have seen an increase in attempted robberies lately, according to the report.  Seattle area Congressman Denny Heck told the news station the increase in robbery attempts is a result of the fact that marijuana dispensaries are cash-only businesses. Banking institutions, essentially, do not want to run afoul of federal law by accepting credit card payments for marijuana, which, under federal law, is still considered to be an illegal drug.

“All cash.  That is a magnet for crime,” Congressman Heck told the reporter. “And we ought to do away with it and provide these legally constituted businesses access to banks.”

Ryan Hunkel, a co-owner of Have A Heart, also said he he fears marijuana shops will remain a target until the banking laws change.  Although, he added, thieves seem to have the wrong idea about how much cash the dispensaries actually keep in the stores.