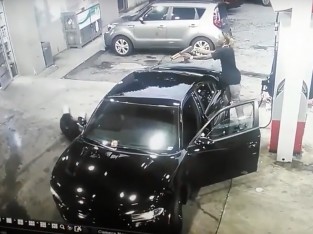 WSB-TV reports the incident occurred around 8:30 PM at a Texaco station is southwest Atlanta.

Police say the incident started when a man who is believed to have had a handgun in his waistband approached and confronted a second man who parked at a gas pump.

Video shows the second man retreat to his vehicle and pull out what appears to be an AK-47 type weapon.

One man appears to fall to the ground as the other man approaches him, pointing the AK-47 style weapon at him as he appears to plead for mercy while on the ground.

The man on the ground then suddenly gets up and starts running around the vehicle parked at the pump as shots appear to ring out, striking the windshield of one vehicle.  The man with the AK-47 continues to fire at the other man, who is now somewhere out of the range of the camera.

According to the news report, a female passenger inside the vehicle parked at the pump was struck by a bullet in the shoulder.

After one of the shooters ran off, the female passenger and the driver of the vehicle reportedly went inside the gas station to call 911.

Atlanta police are reportedly reviewing the video and investigating the incident.