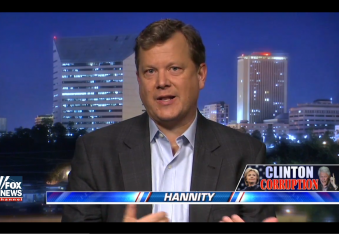 Peter Schweizer, author of the best-selling book turned documentary film Clinton Cash, says he “knows” the FBI is currently investigating the Clinton Foundation. Schweitzer made the claim on Monday night during an interview with Sean Hannity on Fox News.

Hannity brought Schweizer on to discuss his recent article published in the Wall Street Journal that looks at the potential negative consequences of technology transfer program between the United States and Russia.  The plan essentially called for the cooperation of major U.S. and European technology companies to help Russia create its own Silicon Valley.  The person in charge of getting U.S. companies involved in this program was then-Secretary of State Hillary Clinton, who reportedly made it a cornerstone of the “Russian Reset.”

After the partnership was underway, the U.S. military and law enforcement agencies began to warn that the Russians were using the program for defense related purposes — which was outside the stated scope of the program.  The agencies also warned that this could be harmful to the United States’ national security interests. Schweizer states that leaked Wikileaks cables even show the State Department had received warnings about Russia’s apparent misuse of the technology, yet they apparently took no action.

Schweizer replied,  “I can tell you, Sean — I can’t go into detail. But I can tell you on personal experience that I know the FBI is investigating the Clinton Foundation.”

“I’d rather not talk about that, but they are doing it at present,” Schweizer responded.

Hannity then said he would not press the issue further and the segment ended.

The Clinton campaign reportedly declined to comment on Schweizer’s allegations.