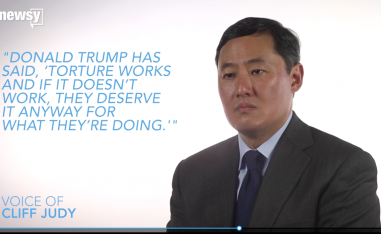 Former Bush-era Department of Justice lawyer John Yoo — best known as the author of the DOJ memos that approved the use of enhanced interrogation techniques (EITs) on al-Qaeda detainees in the aftermath of 9/11 — weighed in on Tuesday on recent comments from GOP presidential frontrunner Donald Trump about bringing back the use of waterboarding, or worse.

In an interview with Newsy, a video news service partnered with the University of Missouri School of Journalism, Yoo said the decision to approve waterboarding was easily the most difficult question they faced when approving the use of enhanced interrogation techniques after 9/11.

“Our view was it was basically right at the line of what was legal or illegal but that you could not go beyond it,” Yoo said.

In response to a montage of Trump repeatedly stating that he would bring back waterboarding, and “a hell of a lot worse than waterboarding,” Yoo said, “To me, this is just another example of I think Trump exaggerating, overstating, playing to a crowd.”

However, Yoo said what is concerning is that Trump does not appear to understand the rationale for why using EITs was previously deemed appropriate.

“So, from hearing his comments, it sounds like Trump is talking about interrogation as punishment, that it’s something we should do just to get back at the terrorists.  That’s really not its point at all.  The whole point of interrogation is for you to get intelligence that allows you to stop future attacks.  And that’s it,” Yoo said.

“So for Trump to say that he would go beyond waterboarding, I have no idea even what he has in mind, but if he wants to do things which are worse to people, I think it would probably… it would violate federal law.” (our emphasis added)

In January 2009, President Obama issued Executive Order 13491 which banned the use of EITs and required the CIA to follow the methods outlined in the U.S. Army Field Manual in any future interrogations.  While a President Trump could easily rescind the Executive Order, he would still face significant hurdles in any effort to bring back the use of EITs.  In fact, former CIA Director Michael Hayden recently said Trump, or any other president that wanted to waterboard someone, would “need to bring their own damn bucket” because the CIA won’t do it.