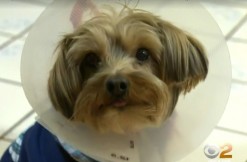 Look at that picture. See that cute doggie? His name’s Snoop. He allegedly got pepper sprayed Wednesday in Los Angeles by burglars breaking into his owner’s home.

Home surveillance footage caught the incident on tape. 3-year-old Snoop can be seen barking as two men broke in. Then one of them found the dog off-camera, and allegedly unloaded the spray. To be clear, this guy allegedly sought the dog, not the other way around. Police are saying the suspects then stole a handgun and jewelry worth thousands of dollars. Cops said the suspects might be responsible for a dozen recent burglaries in the area.

The owner came home to find Snoop suffering from the pepper spray attack.

“He was rubbing his eyes and scratching it and his eyes were squinted,” the man told CBS. He asked not to be identified in their report.

“They can take anything they want, but if they hurt my dog, that’s the worst fear,” the owner said. He has since installed an alarm.

[image of Snoop via CBS screengrab]
–