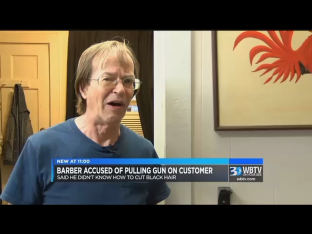 A South Carolina barber spent a night in jail earlier this week after he was accused of pulling a gun on a black customer and saying, “I don’t do black hair.”

Larry Thomas, 65, of Rock Hill, SC was arrested and charged with pointing and presenting firearms at a person, according to WBTV.

The customer, Arthur Hill, says he stopped at the barber shop on his way to work and asked if he could get a shave.  Hill told WCNC that Thomas told him, “I don’t do black hair.”

“Are you referring to African-American hair?” Hill says he asked Thomas.

It was at that point Hill says he noticed Thomas had his hand on a snub nose .38 revolver, so he left the shop immediately and contacted the sheriff.

“I was shocked, I was shocked for my life, because I’m thinking that could’ve been me laying on the floor dead,” Hill told WCNC.  “He did not point it at me, but it was clear in sight like he meant business.”

Thomas was released from jail after posting the $3,000 bond and was back at his shop on Wednesday where he spoke with WBTV about the incident.

Thomas remembered things differently, telling the reporter he felt threatened by the man.

“And I told him I did not do black hair and he kept coming towards me and I stepped back here and I always keep a gun right here and I just picked up my gun and put my gun at my side” Thomas said.

Thomas defended his actions, saying his decision to not cut black hair has nothing to do with race.  He says he just is not trained to cut black hair.  According to the report, it never occurred to him that explaining his limitations to customers would be a “bad thing.”

“I don’t do flat tops. White people wear flat tops. I no longer cut women’s hair because I’m not good enough to cut women’s hair anymore. The only thing I do is I stick with my middle age group of men,” Thomas told the reporter. “I’m just not good enough to do black hair cutting at all. Being an autistic individual, I pretty much stick to my routine.”

Thomas also cited his autism as the reason he does not do well in confrontational situations.

WBTV reviewed police records and found multiple reports of incidents involving Thomas and customers dating back to 2007.  Most of the reports claim service was denied to a potential customer, including an Asian-American, white men, a child, a Latino and even a disabled-veteran.

Thomas has also been accused of pulling a weapon on a customer at least two previous times, according to the report.

Thomas says sheriff’s investigators have confiscated his weapons, pending the outcome of the case.