Trump Pretty Much Admits That He Expects Servicemen To Be Rapists 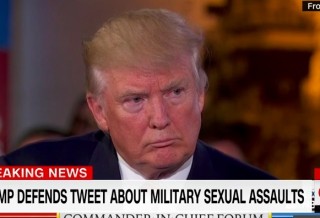 Donald Trump somehow stumbled his way into making a valid point yesterday when his stream-of-consciousness defense of an inane tweet landed on the idea that sexual assaults should be vigorously prosecuted.   During Matt Lauer’s pre-debate interview with Trump, Lauer asked Trump about this 2013 tweet:

26,000 unreported sexual assults in the military-only 238 convictions. What did these geniuses expect when they put men & women together?

Trump, with a smug and characteristically told-ya-so response, told Lauer, “Well, it is a correct tweet…There are many people that think that that’s absolutely correct.” For the moment, I’d like to put aside the glaring evidence that Trump seems to equate the idea of correctness with “what people think is correct,” – but we’ll come back to that later.

Donald Trump “absolutely” stands behind his horrible 2013 tweet about sexual assault in the military https://t.co/c7mAsS1a06

Trump’s purported point—that sexual assaults in the military are prosecuted at inappropriately low rates—is absolutely true. Sexual assaults are, across the board, prosecuted at rates far lower than those of other crimes. The cause of the iniquity has many facets; sex crimes often go unreported, are difficult to prove, and are subject to biases that disadvantage the victim. The disparity between the number of sexual assaults that occur and those that result in criminal convictions is a disturbing reality that inflames the public when defendants like Brock Turner and David Becker dominate a news cycle, but recedes into the background afterward.

The many impediments that hinder prosecutions of sex crimes are so obvious that even when trying to make a wholly different argument, Trump accidentally spoke some truth. Looking back at Trump’s original tweet on the matter, though, it’s pretty clear that his understanding of sexual assault prosecutions is afflicted by the superficiality we’ve come to expect from Trump. His meaning was clear: men cannot be trusted around women. In Trump’s world, sexual assault is a natural consequence of fraternization.

Not only is such an assumption utterly dismissive of the many men who are victims of sexual violence (according to a Department of Defense report, over 10,000 men in 2014 alone)  but it also plays directly into the faulty logic that stymies sex crime prosecutions in the first place. When sexual assault is expected, so too is it excused. When men are presumed to be rapists, we impute the assumption of risk onto all women who choose to spend time in their company. The law relies on such logic when it regulates the possession of wild animals; because they are inherently dangerous, those who choose to keep them do so at their own risk. But servicemen are not wild animals. They are professionals who are, and should be, held to the same behavioral standards of all other Americans. They have both the ability and obligation to follow the law – regardless of their gender or that of those around them.

Trump’s flip comment about the “geniuses” who “put men [and] women together” may have played well with his supporters, because there are many who have deep resentment over the idea of women serving in our armed forces. But suppose he’d been talking about our colleges and universities instead of our military, where there is also an epidemic of sexual assault. Would he have sarcastically suggested that allowing boys and girls to attend college together is stupid? He may want to check in with his campaign CEO Stephen Bannon, who recently got some press for having referred to students of elite women-only colleges as, “a bunch of dykes that came from the Seven Sisters schools.”

Let’s just get back to Trump’s interview follow-up to his tweet about the military – the part where he basically defined “correct” as “what people think is correct” (emphasis mine). That short, off-the-cuff remark is actually what’s most significant about Trump’s statements. Above all else, a president must have the ability to communicate – with his citizens, with his government, and with foreign nations. Effective communication relies on the premise of common foundations; without a shared understanding of the abstract concept of truth, neither leadership, nor exchange is even possible. With one foolish tweet and his predictably misguided defense, Trump reminds us that he is as uninformed as he is unfit.