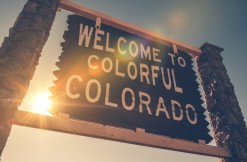 Federal appeals judges just answered an important question. Can cops pull over a car just because it’s from Colorado? Their answer: No. That sorts out that legal controversy.

But no, really, Kansas Highway Patrol Officers Dax L. Lewis and Richard Jimerson were sued after pulling over and searching Peter L. Vasquez’s car. Their rationale: The car was old (the driver’s registration also listed newer cars), it was the middle of the night, the license plate was from a drug-source state (Colorado allows marijuana possession), and it was on Interstate-70 (a known “known drug corridor”). Also, Vasquez seemed nervous, and officers thought it was unusual for him to have a pillow and blanket in the vehicle. They searched the car though Vasquez refused to give them permission, but found nothing illegal.

Vasquez sued in 2012, and appealed after a District Court ruled against him, saying the officers had qualified immunity. But on August 23, Tenth Circuit judges backed him up, and reversed the earlier decision. They said the patrol violated his rights by detaining him after he refused a search, and by searching his car anyway.

“In sum, Vasquez’s conduct does not create reasonable suspicion,” wrote Judge Carolos F. Lucero. “What we have here is a driver traveling from Colorado to Maryland, on a major interstate; in an older car despite owning a newer car; with blankets and a pillow obscuring items in the back seat; who did not have items visible that an officer expected to see; and who was and continued to be nervous when pulled over by officers late at night. Such conduct does not raise an inference of reasonable suspicion. Thus, we conclude that the Officers violated Vasquez’s Fourth Amendment rights in searching his car.”

“Because reasonable officers may differ regarding whether Vasquez’s detention violated the Fourth Amendment, I would affirm the district court’s finding of qualified immunity,” he wrote.

[image via Welcomia and Shutterstock]
–